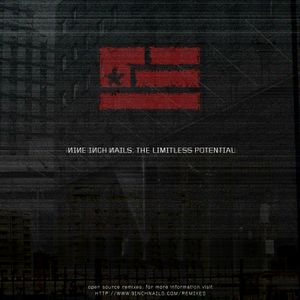 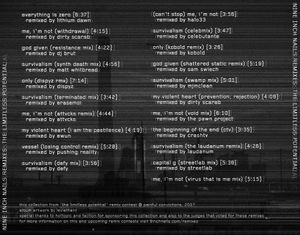 The Limitless Potential is an open source remix compilation of songs from Year Zero, but also includes a few remixes of Only. It was released as a Torrent on September 5, 2007.

It was hosted on Painful Convictions. It is composed of the fan remix contest winners. First place was Dirty Scarab with for "My Violent Heart (Prevention; Rejection)." Second was awarded to Pushing Reality for "Vessel (Losing Control Remix)."

The album was compiled through the efforts of a months long deliberation to sort through some 200 fan submitted NIN remixes, the end result being a 21 track album.

Over two hundred tracks were submitted to Painful Convictions for the juried competition, and were voted on by six judges, including personnel from Painful Convictions and The NIN Hotline. Every track that received a majority of "YES" votes over "NO" votes was included in the competition. Luckily (for the judges) there was only one voting period -- Dirty Scarab's mix was the only one to receive six "YES" votes.

The image on the front cover art depicts the flag of the Year Zero Alternate Reality Game-based A.I.R (Art Is Resistance) resistance group.

The album is a 21 track open source remixes collection of songs from Year Zero. It is only available on digital download via Torrent.