"Survivalism" is the third track and the first single from the 2007 album Year Zero.

On March 13, the source files for the song were released in GarageBand format at nin.com. "Survivalism" is the third NIN song to be officially released as source files—"Only" and "The Hand That Feeds" were previously released.

Survivalism is the belief that one must be prepared to survive a major catastrophe by stocking up on food and weapons. A survivalist therefore is a person who anticipates and prepares for a future disruption in local, regional or worldwide social or political order. Survivalists often prepare for this anticipated disruption by learning skills (e.g., emergency medical training), stockpiling food and water, or building structures that will help them to survive (e.g., an underground shelter).

Found on Year Zero as well as the Survivalism single and promo. Characterized by much synthetic layering and a consistent eighth note drum machine pulse, matched by a single note bass riff that begins on the second eighth and ends on the eighth before repeating. This gives the song an apparent metric shift one eighth note forward, though the first downbeat of each measure is actually in the space between the stop and start of the bass and guitar riff. The chorus features many layers of group vocals, including some by Saul Williams. After the final chorus, a new guitar riff leads off a coda that builds in layers of drones until suddenly stopping and leading into "The Good Soldier."

A radio-friendly edited version that is found on the Survivalism promo. The word "whore" is edited out.

Included on the Survivalism single and Y34RZ3R0R3M1X3D, this remix was created by Williams and Thavius Beck. The music isn't as guitar-driven as the album version and the chorus consists of Reznor's vocals with Williams' vocal contributions reduced significantly. The breakdown repeats the lyric "All a part of this great nation." There is also hand-clap percussion over pulsating beats and some distortion on Reznor's vocals at some points in the song. Although it may not seem as heavy as the original, it's still heavy in terms of percussion.

Available on the UK 9" Vinyl Survivalism single. This remix, also by Williams, features him incorporating new lyrics into the verses and delivering them with more of a spoken word/hip-hop flow. Reznor's vocals become backing vocals on this track, allowing Williams to come to the front. The music is very similar to that used in the "Tardusted" version. The new lyrics sung by Williams are as follows:

The spoken word rhythm of this remix has a strong resemblance to Williams' song "P.G." from Saul Williams.

David Andrew Sitek is member of TV On The Radio, who opened for Nine Inch Nails during the Live: With Teeth tour. This remix was originally available as a UK-only iTunes download. It came as a free bonus track packaged with the full album download of Year Zero. It is alternatively available on the Capital G single. It is akin to the original song sound-wise, but features a heavier and more plodding drum line. Additionally, it enhances Williams' back up vocals and makes them more prominent than in the original. The structure and length of the song remains relatively unchanged.

This is a remix by deadmau5, originally released through his official SoundCloud account in 2012, then commercially on his album while(1<2).

On 3/13/07 Garage Band files for Survivalism were released on nin.com. Along with Survivalism, there was another file called Survivalism Our End Trip with some weird sounds. After rearranging the file through a spectogram, this was found. The following case number for Judson Ogram was found: 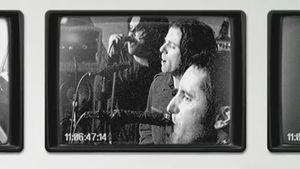 Screenshot from the "Survivalism" video 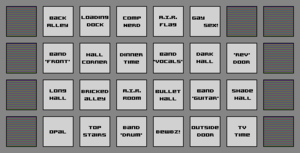 Layout of the video screens

Filming for the "Survivalism" music video began on February 5, 2007, at Lacy Street Studios. It was directed by Alex Lieu, Rob Sheridan, and Reznor, and produced by Susan Bonds. The video was "leaked" to the internet via flash drives found dotted around the venue by people attending the Nine Inch Nails concert in London on March 7, 2007.

SPOILERS BEGIN
A wall of surveillance monitors details the activities of several people in an apartment building. A group of rebels is creating stencils and spray-painting the "Art Is Resistance" logo on walls. In an apartment, a pair of gay lovers share an intimate moment. In another dwelling, a young asian woman stands topless at her mirror doing her hair and applying make-up. Elsewhere someone is high on drugs, while a couple just sits on their couch in their home. A man is seen on a computer with several photos and news clippingsbehind him. Another man is seen on camera eating his dinner. Seen on several monitors is Nine Inch Nails playing the song in what is assumed to be their practice space. Intercut with these scenes is footage of armed soldiers, dressed like SWAT members, moving in on the building and one of the spaces in the video.

At the end of the video the people in the other monitors seem to respond to an ado in one of the spaces seen on the monitor wall. The space where NIN was playing has its door busted in and a pool of blood leading out, while all of the other cameras trained on the band have gone to static. At the very end a body is seen being dragged around a corner, leaving a trail of blood. Presumably the body is that of Reznor, as it wears the same scarf that he is seen wearing throughout the video.
END SPOILERS 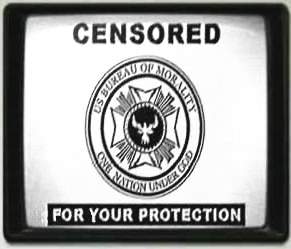 The Bureau Of Morality's censoring at work.

The video has aired on MTV2, but in a censored form. The screens with the woman at her mirror and the gay lovers have been replaced by a white screen bearing the seal of the US Bureau of Morality and the phrase "CENSORED FOR YOUR PROTECTION." This is not unlike the use of SCENE MISSING screens in the "Closer" video. Interestingly enough, the word "whore" and the screen depicting the girl using opal are left intact. Even the ending scenes of the pool of blood in the band's space and the body getting dragged off are retained.

"Survivalism" was played live for the first time at the Razzmatazz in Barcelona, Spain, on February 19, 2007[3] (video here) , and has been a setlist staple for all tours since except the NIN + Soundgarden Tour in 2014.

However, the last lines of the third verse are changed to the following on the actual recording: