"Me, I'm Not" is the sixth track on the 2007 release Year Zero. Multitracks for this song were released in raw WAV, GarageBand and Ableton Live formats via remix.nin.com. 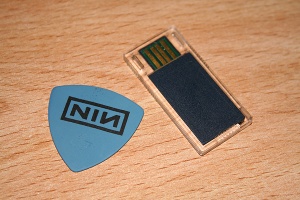 The USB flash drive containing "Me, I'm Not" and the audio file leading to the second phone message.

At the February 19th, 2007 Nine Inch Nails concert in Barcelona, Spain, a second plain-looking USB flash drive was found in a bathroom stall. This drive had two MP3 files: one called 2432.mp3 and the other "Me, I'm Not."

A forum user said on The Spiral and ETS:

again ...
ITS STOLEN FROM KMFDM -
but KMFDMs version is better ...

Trent Reznor replied on The Spiral:

You: go fuck yourself. Now. The day I steal something from KMFD-Fucking-M is a sad fucking day indeed. Call up Sasha and have him sue me if you feel that strongly about it, meanwhile let everyone have some goddamned fun without you pissing on the parade.

This is the original album version. Highly repetitive, it features a consistent drum loop and manipulated bass riff throughout. On top are layered various synthesizers and samples in addition to Reznor's vocals, which are mostly sung in his lower range, sometimes nearly whispered.

Me, I'm Not (Instrumental)

Me, I'm Not: Olof Dreijer

This remix is on Y34RZ3R0R3M1X3D. Coming in at over 14 minutes long, it's the longest Nine Inch Nails remix to be officially released. Very different from the album original, it begins with a simple beat and synth melody, over which a high-pitched droning sound element is added. This sound invokes similarities to the instrumental melody within the original song's chorus. The sound is a lot like a wave, cresting and receding. Soon, a basic percussion beat comes in on top of these sounds. At around 4 minutes in, the higher sound drops out, and finger-snap percussion joins in shortly thereafter. A hi-hat beat joins in and another beat comes in. At around 5:25 the higher sound begins to creep in and whispered vocals ("I'm not used to this") come in and out through this portion of the song. A lower synth melody comes in almost halfway through as the higher part again disappears momentarily. The higher sounds return as vocals appear sporadically in this sequence. Once again, a wave-like pattern is invoked in the sound elements dominating this piece. Past the 9-minute mark, the lyrics "I define myself/By how well I hide" and "What I know right now" are clearly audible through the rest of the sounds. The finale contains several sound elements emerging and fading away in a repeated cycle before fading out altogether.

"Me, I'm Not" was first played live on May 9, 2007 at Luna Park in Sydney, Australia, and remained a regular for the rest of the Performance 2007 tour. Reznor and Alessandro Cortini both play keyboards and synths on this song, with a computer hooked up to Reznor's machine. In the song's first live performances, Reznor played slide guitar but it was played by Aaron North in subsequent performances. Josh Freese and Jeordie White did not play on this song live.

Throughout the Lights in the Sky Tour, "Me, I'm Not" was occasionally played before the "Ghosts" section of the setlist, played alongside (or replaced with) "Vessel", "The Warning", or "The Great Destroyer".

The song was a regular on some legs of the Hesitation Marks touring cycle, including opening the show at several dates. It would continue to be played occasionally throughout the Cold And Black And Infinite Tour in 2018 and the U.S./U.K. 2022 tour.

The ninth line of the first verse was shortened in the actual recording: