"The Way Out Is Through" is the first track on the Right disc of The Fragile. It is one of the more abstract and non-traditional songs on the album, with its structure based around a drawn-out crescendo. It was featured in a teaser trailer for the album, with Trent Reznor singing part of the chorus a cappella. It is often confused with "Underneath It All" due to that song title appearing in its lyrics. 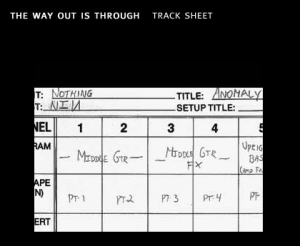 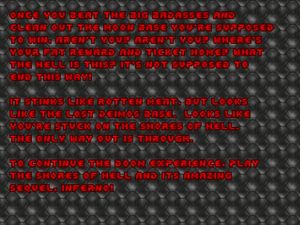 The filtering was done two ways. The music went through the filters on a Virus synth and that was programmed via midi. We used that treatment a lot on the record. The vocals/whispering that come up at the beginning was done by sending them out to a little Auratone speaker on a long lead and the assistant holding it and walking a long a corridor into a big garage with a U87 mic at the end of it. He started at the end of the corridor and walked right up to the mic. The idea being it sounds like it comes from far away and gets closer. I was bored and thought it'd be funny to do, it took a few attempts to get the timing right.

"The Way Out Is Through" made its live debut on November 14, 1999. During the Fragility v1.0 tour, the song was played behind a large curtain onto which images were projected, sung in a lower key and its climax marked both the end of the song and of the "slow section" of the concerts, with the curtain rising and leading into "Wish."