The first part of the Fragility tour, titled Fragility v1.0, took place between November 1999 and February 2000 in Europe, Japan, and Oceania in support of The Fragile. Opening acts for this tour were Atari Teenage Riot and Skingame. 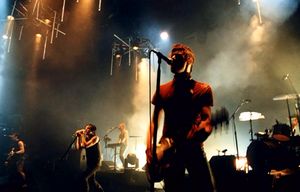 The European and Japanese legs of this tour featured a flowing, gauzy backdrop that could be backlit as needed, and large chandelier-like lighting fixtures that hung down over the band, with narrow light tubes that glowed and flashed during certain songs in the set.

It also had a projection screen for three songs in the middle of the show, "La Mer," "The Great Below," and "The Way Out Is Through". "La Mer" was accompanied by footage of the ocean, "The Great Below" by microscopic footage of things such as cell division or a heart valve in action, and "The Way Out Is Through" by reflected water ripples that would distort and pixelate with the music. In April 2018 a tape with the ocean footage made by David Carson was bought on ebay and shared on ETS, and can be watched here.

"Something I Can Never Have" was played once in Europe. Also "Reptile," "Please," and/or "Even Deeper" were added at some shows. Big Day Out shows featured shorter and more aggressive setlists.