The digital release includes expansive artwork in PDF format, including some imagery not seen in the original version of the album. The vinyl comes with a digital download card.

On December 24, 2016, Trent Reznor stated that: "When a track from Deviations says (Instrumental), that's because at some point that track had vocals on it. Those could be finished, a demo or just an outline." For info about alternate versions of tracks that were already instrumentals, see the individual track pages. 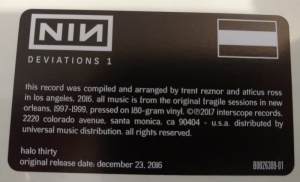