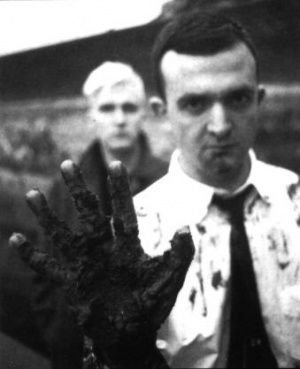 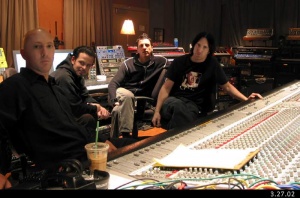 Coil was an experimental/industrial group primarily consisting of John Balance and Peter Christopherson. They were commissioned to do several Nine Inch Nails remixes and Trent Reznor's side project, How To Destroy Angels, was named after Coil's first single. Christopherson also directed several music videos for NIN and collaborated with Reznor on "Videodrones; Questions".

Many of the NIN remixes also employed part time Coil member Danny Hyde. Drew McDowall was an additional Coil credit on the Further Down The Spiral remixes. In an interview, Peter Christopherson also mentioned that Reznor asked Coil to do a remix of "The Perfect Drug", but he turned the offer down to focus on Coil's Backwards. At one time the group planned on releasing Backwards through Nothing Records, but this never happened. The Backwards demo surfaced and alternate incarnations of the songs appear on the Coil releases The Ape of Naples and The New Backwards. The original Backwards was finally given a proper release in 2015.

The group ended when John Balance died in November of 2004. Peter Christopherson also died in 2010. Christopherson and Reznor were planning to collaborate musically on Reznor's How To Destroy Angels project, but Christopherson passed before this could come to fruition.[1]