"The Perfect Drug" was written and recorded for the Lost Highway Soundtrack in 1996.

Trent Reznor has expressed dissatisfaction with the song, saying in a VIVA 2 Magazine interview,

At that time I was listening to a lot of Drum 'n' Bass and Jungle and stuff. And I think that's the most I've ever seen external influence come out in my own music. And it was a transition period, that's what I want to stress, it was time when I was feeling out what I wanted to do artistically and given the liberation of working within the context of a soundtrack, it's not like a major work. I always treated that as an area to be freer and try things. I'm glad it was in that context. There was never any consideration to include that on [The Fragile]. It really was an area where I was feeling out the landscape to see what I wanted to do.[1]

This is the original version that can be found on the Lost Highway soundtrack as well as some editions of "The Perfect Drug" Versions. It features prominent acoustic guitars playing a quick, ascending riff similar to the chorus of "The Wretched". It is backed by frantic and complex drum machine programming commonly associated with the drum 'n' bass genre, which opens up into simpler patterns for the pre-choruses. The drum sound in the pre-chorus is highly reminiscent of that on "Eraser". The chorus features heavy guitars backed by more frantic drums, while the bridge is composed mainly of percussion patterns and percussive synthesizers and guitar riffs, which build in intensity to give way to a slower, simpler, quieter coda which features what is likely a Mellotron.

The original song shortened by fifty seconds to suit radio airplay. Available on radio promos only.

The Perfect Drug (We're In This Together version)

From the third We're In This Together single and international Into The Void single, this version is the same as the original, but does not cut off at the end, rather repeating further and fading out.

Released by Reznor via his account at remix.nin.com, this version features a differently-structured ending, but is otherwise the same as the original version minus the vocal tracks.

This remix is almost a dub mix: it is very light on lyrics and emphasizes the percussion beat of the song. The word "annihilate" is added at some points and leads this remix out of the breakdown and into the ending portion. "The only lyrics in this version are "And I want you" and "You are the perfect drug." The drums are sampled from "Amen Brother" by The Winstons.

Incorporating dream-like synths and a danceable rhythm, this remix is notable for its synth rendition of the opening strains of the song. The last few lyrics of the first verse are used, "You are the perfect drug" is heard at the breakdown, and vocal instrumentation has been added. "Take me with you" is repeated at the end of this remix.

This remix begins with Reznor whispering "You are the perfect drug," distorted and slowed down. A dance beat and wind are added over the vocals to form the first section. The lyrics are then sung about a third of the way through, as the beat becomes heavier and the synths build in volume. By the middle of the song, the music becomes much louder as the lyric "Take me with you" is whispered over it. Vocal instrumentation, albeit distorted, is also incorporated into this remix. Perhaps the most notable aspect of this remix is the use of the "Closer" treated piano sound to replicate the melody at the end of the song.

Windchime-like instrumentation over a percussive beat and the whispered lyric "You are the perfect drug" open this remix. It then goes into a percolating beat, with a simple melody over a pulsing bass. This could be considered one of the "quieter" mixes of the song, as it is not as aggressive as the other remixes.

The Perfect Drug (The Orb)

This remix begins with the lyric "You are the perfect drug" heavily distorted as a swirling beat comes in over it. The word "drug" is also repeated at various points in this version. At about three minutes in, the lyric "Take me with you" is repeated as the mix goes into a pseudo-breakdown. At the breakdown, a bass line over percussion, leads into the song's finale.

This remix is exclusive to the vinyl edition of "The Perfect Drug" Versions. It's set in a different key than the other remixes and has a fast, electronic beat. As with most of the other remixes, it is light on lyrics, consisting only of "can't keep control/can't keep track," "taking me," and "you are perfect." The track as released in 1997 was mastered at a slower speed. An MP3 of this version was uploaded to the Rare & Unreleased playlist on remix.nin.com. The original, unaltered track was eventually uploaded to Soundcloud by DJ Aphrodite, who stated: "This is the original speed the remix was made at. For the vinyl, Nothing Records slowed it down to around 160bpm, perhaps to lower the vocals, and at the time the general music loving public were still not used to the speed and energy of Jungle/D&B."

"The Perfect Drug" was not played live until September 18, 2018 at Red Rocks, Colorado, though it was attempted during rehearsals for a few previous tours. It was widely speculated that the complex drum solo in the song was responsible for this, although it was probably not out of the range of drummers Josh Freese or Ilan Rubin. It is also likely that Reznor does not personally like the song very much, as he concedes that it was produced quickly for the Lost Highway soundtrack.

NIN fan Trollmanen was able to ask ex-drummer Josh Freese about the rehearsal process for the song:

The one question I asked him was about playing The Perfect Drug live, and how the rehearsal process went for that song and why it never worked out. The first thing he said, without hesitation was that the song itself isn't that difficult to play live on the drums. He said something about the programmed beats part was the only thing that was sort of complicated (it was a little hard to hear him at times, crappy connection), but that it worked live with him playing it. The drumming sounded good and everyone was happy with that. He said the problem with the song was the ending. The whole song was really rocking and pushing through, then you get to the ending and it just never seemed to work. He said they tried four or so different endings to the song. They tried it kinda mellow sounding, and that didn't work. They tried a really aggressive ending, and that didn't work either. They did a simple ending, same result. They just couldn't find an ending to the sound that seemed to do it justice. The thing was that the song sounded really good, but to get to the ending and just not sound good, it was kind of a let down. He said [Trent Reznor] just seemed uninterested with it after a while and they just gave up on it.

Fellow NIN fan Whiskers had previously asked the same when he had lunch with the drummer. link

Reznor answered a question about playing "The Perfect Drug" live directly during a 2017 Q&A in Chicago. He said:

We've tried it. The unsexy answer is it just doesn't sound that good live. And it's hard to sing, and it ends up making me angry, so we don't do it. 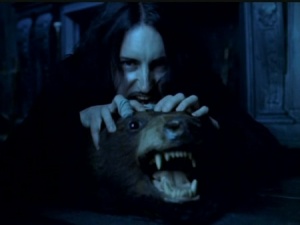 Screenshot from the "The Perfect Drug" video

Mark Romanek, who also directed "Closer," directed the music video for "The Perfect Drug" in 1997. It was one of the most expensive videos at the time, costing over $850,000 to make. Building the two main sets (a refrigerated set and a rooftop set) and commissioning the giant hand sculpture were some of the larger expenses.[2]

The concept of the video is widely interpreted as Trent Reznor portraying a man mourning the death of a child and detaching himself from reality through absinthe. Charlie Clouser, Danny Lohner, and Chris Vrenna appear in the video, most notably playing string instruments at the beginning of the video. The aesthetics were heavily influenced by the illustrations of 20th-century artist Edward Gorey (1925–2000), the most obvious reference coming from the girl sitting on the cushion in front of the painting.

The entire video was filmed with a blue tint with the exception of the drum breakdown, which uses flashing green light instead, representing Reznor losing himself in the absinthe.