"Closer" is the fifth track on the 1994 release The Downward Spiral and is perhaps the most well-known song by Nine Inch Nails, as it received much airplay both on radio and music video television. The subject matter seems to be about a feeling of worthlessness being quelled through control over others using sex. The song was at the number 2 position on AOL's "69 Sexiest Songs of All Time," mostly due to the explicit frankness of its chorus.

This is the original album version, found on both The Downward Spiral and Closer To God. It begins with an electronic beat, of which the bass drum is sampled from the Iggy Pop song "Nightclubbing". A keyboard pattern and sixteenth-note cymbal pattern join in along with the vocals. Layers are continuously added before dropping out at the end, leaving a simple chromatic piano melody to end the song and segue into "Ruiner". The version on Closer To God, however, allows the final piano note and background noise to ring out completely. The track also features a reversed and heavily processed sample from "Take A Chance With Me" by Roxy Music, which is most easily heard during the ending (starting from 5:52.) The sample is also used as an intro when the song is played live. Being the third song on the album to contain the famous "Downward Spiral Motif," "Closer" plays the motif in similar structure to "The Downward Spiral," but in a different key:

The part of the motif that segues into "Ruiner" (and played by Reznor at the end of the video) is played at a higher octave:

Released by Reznor via his remix.nin.com account, this is an unmastered and complete version of the album cut, sans his vocals.

This version is shortened and censored for radio airplay.

This is a major reworking of "Closer," and is quite different in sound and structure. The vocals were re-recorded (with a few lines of new lyrics) to fit the sound of this song:

"Closer To God" is one of the only remixes that has been performed live (on the Dissonance tour).

On the DJ promo vinyl for its release, the track runs roughly 5:29, fading out at the end.

This is an atmospheric remix, made up of heavily distorted synth and percussion loops that sound like machinery. The line "I want to fuck you like an animal" is repeated heavily in the last half. When the song reaches its ending, it changes from the mechanical sound of the rest of the remix to a stripped down form, consisting of only the first verse lyrics, a piano, and the synth drone from the beginning and end of the original song. A special edit was used in the credits of David Fincher's Se7en.

This is one of the lesser reworked remixes of "Closer." It adds an interesting loop in the background the consists of what appears to be a bass guitar and a high-pitched drone. At the end it repeats the two lines "Help me get away from myself" and "You get me closer to God".

This remix uses stereo panning in which the phrases "You get me closer to god" and "I want to fuck you like an animal" switch between left and right speaker.

This remix begins with a significantly modified drumbeat, similar to the drums heard in "A Violet Fluid." Slowly the song picks up and a sound similar to a lion's roar is heard with the cry "I want to fuck you like an animal." Lyrics are then whispered and vocoded. A loud drum solo features, backed by the looped synth whine from the end of the original, and then the lyrics from the choruses are heard.

This remix didn't make it onto the Closer To God EP, but was available from remix.nin.com. This is essentially a variation on "Closer (Internal)".

Released on the semi-official Recoiled EP. A variation on Coil's "Precursor" mix.

Closer (And All That Could Have Been)

This live version uses the swirling synthesizers prominent at the end of the original song for an introduction. Its ending segues into "Head Like A Hole" much like the transition between "Closer" and "Ruiner" on The Downward Spiral.

Closer (Beside You In Time)

On this live version, the instrumental bridge of "The Only Time" is incorporated into the song's bridge. The accompanying lyrics are sung in a manner different from past tours, and the final outro is much shorter than on the album version. 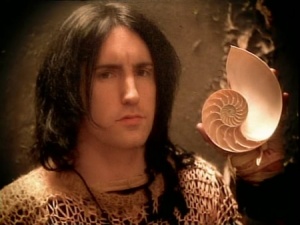 Screenshot from the "Closer" video

In April 1994, a music video for "Closer" was filmed. It was directed by Mark Romanek, who also directed "The Perfect Drug" in 1997 and Johnny Cash's cover of "Hurt" in 2003. The concept to the video is that it's an old stag reel recently uncovered. The aesthetic, atmosphere, and images in the video were inspired by the works of Man Ray, Francis Bacon, George Tooker, the Quay brothers, and, most notably, Joel-Peter Witkin. It was filmed using three-color film and hand-cranked cameras, to make it look much older. Additionally, there were more modern devices included in the video, such as a television.

Romanek has said that Reznor was pretty much tortured throughout the shoot, yet he never once complained. Reznor seemed to know that what they were making would be phenomenal and would push the proverbial envelope of the music video format.

Initially, there was a plan to film two versions of the video: an uncensored director's cut, and an edited version for MTV. This idea would save money on editing because of the costs of editing the film that was used. Reznor objected to shooting a censored version, stating that he didn't care whether or not MTV would show the video. MTV would show the video, but not before edits were made. The network censors objected to imagery they felt was blasphemous (a crucified monkey and a crucifix on a nude woman's blindfold), too risqué (Reznor gagged in front of a wall covered with sado-masochistic paraphernalia and writhing from a chain while blindfolded), or too overtly sexual in nature (the nude woman and a diagram of a vulva). Ultimately, the video was edited for MTV, with offending images either blurred or blacked out, zoomed in to avoid objectionable content, or replaced by a screen reading SCENE MISSING. Some innuendo did make it past the censors, such as the shape of the microphone in some scenes, and what the hanging beef carcass appeared to resemble in addition to wings. Despite the heavy editing on MTV, "Closer" would go on to become one of the network's most popular videos in 1994 and 1995.

The uncensored director's cut can be seen on the Closure video as well as the DualDisc re-issue of The Downward Spiral. It can also be found on a compilation DVD of Mark Romanek's work (Director's Series Vol. 4: The Work of Director Mark Romanek) along with footage from the making of the video. A further five hours of behind-the-scenes footage eventually surfaced on eBay and was liberated and spread around freely by the NIN fanbase.

Over the years, "Closer" has been included on many greatest video lists. In 2006, it was voted the greatest video on VH1 Classics' "20 Greatest Music Videos of All Time." It has also been placed in the permanent collection at the Museum of Modern Art in New York City.

"Closer" has been regularly performed live since 1994. Starting from Live: With Teeth tour, the instrumental breakdown of "The Only Time" was incorporated into the breakdown of "Closer". Also, the second to last line of the song has been sung as "I am the honey inside your hive" instead of "I drink the honey inside your hive." An example of this can be seen on Beside You In Time.

After being in setlist rotation for 14 years, Reznor stated in a web interview that the song is "nowhere on the setlist" for the Wave Goodbye Tour, despite it later being played a handful of times on that tour, with Trent playing the breakdown from "The Only Time" instead of Alessandro Cortini. During the Tension 2013 Tour, "Closer" was referenced during some live performances of "All Time Low".