"Eraser" is the eleventh track on the 1994 release The Downward Spiral.

This is the original album version. It consists of a 6/4 instrumental ostinato that builds up from the odd sounds of humming and "erasers" (created by blowing into the mouthpiece of a saxophone) at the beginning through heavy rhythmic drumming and very oddly tuned, distorted guitars before dropping out to the 4/4 vocal area, which gets progressively louder until Trent Reznor yells "Kill Me!" It then completely degenerates into noise and cuts off with only the fading out of the string synthesizer. The beginning crossfades from the end of "A Warm Place" and its ending crossfades with the introduction of "Reptile."

Released by Reznor via his remix.nin.com account, this version does not include the intro.

This remix contains a sample of the lyric "erase me" slowed down and repeats the phrase "kill me" throughout.

This remix is very soothing yet still retains the darkness of the original. The first eight lines of the lyrics are repeated three times in the entire piece, but the lyric "fuck you" is the seventh line rather than the fifth.

This remix consists of the lyric "erase me" slowed down and repeated eight times in the entire piece, surrounded by piercing and mechanical synthesizer and sample manipulations. When played on fast-forward, the "erase me" refrains can be made out much more clearly.

Released on the semi-official Recoiled EP. A variation on Coil's "Erased, Over, Out" mix.

Released on the semi-official Recoiled EP. Another variation on Coil's "Erased, Over, Out" mix.

This live version keeps close to the album version, and was recorded during the same filming as the "Hurt" and "Wish" live music videos.

Eraser (Beside You In Time)

This live version appears on the Beside You In Time DVD. A screen is dropped in front of the stage as images of war, bacteria, and animals hunting prey are projected. 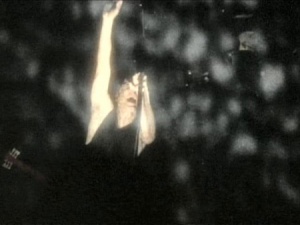 Screenshot from the "Eraser" video

A music video directed by Simon Maxwell was included on Closure. It's a live performance filmed in early 1995. A screen is dropped down in front of the stage as footage of the Devil's Tower in Wyoming and other locations is shown as the song builds. The band is seen behind the screen, starting with guitarist Robin Finck sitting near the drum risers and Reznor playing guitar at the center of the stage. The light focuses more on him as the vocals begin. By the time it gets to the screaming finale, the footage consists of nuclear explosions, with the detonations timed with the song itself. The footage used for this (as well as the live videos for "Hurt" and "Wish") was shot in Dallas, Texas and Omaha, Nebraska in February of 1995.

"Eraser" made its live debut on August 27, 1994. Often played with screen projections of some sort. During the Self Destruct Tour, these projections were of desert landscapes and microscopic "chaos". A version played during the Dissonance Tour begins with a new drum loop and the humming/straw sounds, it builds with the same guitar parts as the album version. The atmosphere builds until approximately the middle of the song, where the lead guitar switches from the main melody and into a version of the "The Downward Spiral"-motif played by Reznor, which builds in volume into a distorted, start/stop climax and a final power chord left ringing. The variation of the motif found here is much shorter and played as follows, with variations that bend the notes similar to the song's regular guitar melody:

During the Live: With Teeth tours, these screens progressed from peaceful images of lush meadows and flowers to violent and disturbing images of war. During the European leg of the Performance 2007 tour, no projection was used during the performance. However, small lamps would float directly above each band member and sway back and forth.

The actual recording adds the following line that does not appear in the liner notes: