"Pinion" is a very simplistic track that begins the Broken EP.

A pinion is a gear with a small number of teeth, often engaging a larger gear. It's also a bird's wing or flight feathers. To pinion someone is to bind their hands and feet in such a manner that they cannot be used. An example of this last definition can be seen in the music video to the song.

This is the only version available. It features a pulsing series of short, ascending, distorted guitar power chords and a collage of atmospheric loops, including a reversed sample from the end of David Bowie's "It's No Game" [1], which eventually give way to the guitar riff once more before leading into "Wish." These last chords are looped several times to lengthen the music video soundtrack.

Pinion (And All That Could Have Been)

A live performance of the guitar riff is combined with many elements of "The New Flesh" (at 107 BPM) to form the introduction of the DVD and VHS versions of And All That Could Have Been, frequently used to begin many dates of both Fragility tours. 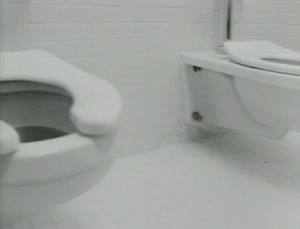 Screenshot from the "Pinion" video

The music video for "Pinion," released in 1992, was directed by Eric Goode and Serge Becker, who also directed "Help Me I Am In Hell."

The video was filmed entirely in black-and-white and starts in a restroom. The camera focuses on a toilet containing a dark substance, typically assumed to be blood. The water and the substance are flushed down as the camera follows. As the viewer is led through the pipes to see where the water is going, the camera cuts between exterior views and interior views of the pipes. As the music crescendos, the water pressure increases. Finally the camera comes to a white room as water is pumped through a pressurized machine, which is forcing the water into the mouth of a figure that is blindfolded, bound completely in vinyl (or patent leather) and strapped to the wall.

Because of the disturbing nature of the video, MTV would only play it late at night before removing it altogether. However, part of the video's finale became an integral part of the opening sequence for the network's Alternative Nation.

The same video is featured both on Closure and the Broken Movie.

Recordings of this song have often been played as an introduction as the band takes the stage, sometimes with the aforementioned looping, backwards David Bowie vocal sample (resembling the word "flush" but actually just "shut up" backwards). It was resequenced, bent, distorted and combined with the opening loop of "Terrible Lie" to open Woodstock '94 and most other dates on the Self Destruct Tour, and combined with "The New Flesh" to open all Fragility Tour shows. When preceding "Mr. Self Destruct" and "Somewhat Damaged," noise samples operated as connective tissue between the final notes of "Pinion" and the opening of the first song.

A very short version began KROQ Almost Acoustic Christmas, presumably because they were behind schedule in setting up the stage. The full studio version was also used to bridge the quieter, Ghosts I-IV-focused section of the Lights In The Sky Tour setlist (the end of "The Greater Good") with the faster-paced second half (beginning with "Wish"). It has also been meshed with "The Eater Of Dreams" as a pre-show opener on various tour dates.