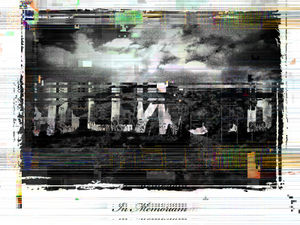 "In This Twilight" is the fifteenth track on the 2007 release Year Zero.

Text messages have been received from the barrier at the Manchester show, citing the discovery of a USB pen. It's been handed to a girl called Elizabeth, who should be uploading the contents 'soon.' Stay tuned.

The song leaked at approximately 5:30 PM (PST) on the Echoing The Sound forums.

This is the original album version. Its chorus features a bass guitar through a guitar amp with the gain and volume of the amp turned up very loud. Trent Reznor's vocals are somewhat further back in the mix to highlight the haunting aspect of the song's instrumental parts.

In This Twilight (Instrumental)

In This Twilight: Fennesz

This remix is heard on Y34RZ3R0R3M1X3D. It begins with a droning synth under which the vocals are added. These synth noises dominate the mix, almost drowning out the original melody and vocals. By the second verse, a swirling guitar is heard under the vocals rather than the original melody. The second chorus is repeated in the second half of the song as more sound elements are added over it. As the chorus ends, some sound elements drop out, leaving a melody and a droning sound to end the song.

"In This Twilight" made its live debut on July 26, 2008. It was the final encore and set closer on 2008's Lights In The Sky Tour and the band members left the stage one by one. It was also the very last song played at the 2009/09/10 Los Angeles, CA Wiltern Theatre show, the final show in the Wave Goodbye Tour. During the Tension 2013 Tour, this song featured backing vocals by Lisa Fischer and Sharlotte Gibson.

On December 14, 2018, Mike Garson joined the band to perform the song live as a reworked version.