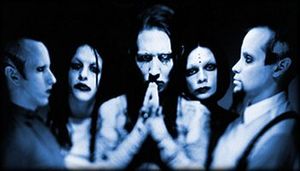 Marilyn Manson is a shock-rock band formed in 1989 by Brian Warner, originally called Marilyn Manson And The Spooky Kids. In 1993 the band signed to Nothing Records after impressing Trent Reznor with their music. Reznor played a major role in producing the band's 1994 record, Portrait of an American Family, and many members of Nine Inch Nails co-wrote and performed on the next album Antichrist Superstar. Reznor also produced EPs, single tracks and remixes in between these records. The band also toured as a support band for NIN on the Self Destruct and Further Down The Spiral tours, and as part of a Nothing Records showcase for the Nights Of Nothing Tour.