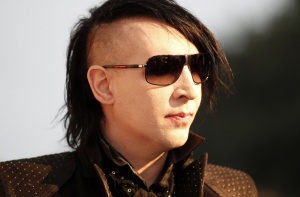 Brian Hugh Warner (better known by his stage name Marilyn Manson) (born January 5, 1969) is the lead singer and shock artist of the band Marilyn Manson, formed in 1989. In 1993, the band signed to Nothing Records after correspondence with Trent Reznor, who was impressed by their music. Reznor had a heavy hand in producing the 1994 record Portrait of an American Family and many members of Nine Inch Nails performed and co-wrote songs featured on 1996's Antichrist Superstar. Reznor also produced EPs, single tracks, and remixes in between these records.

Reznor and Manson are rumored to have fought over control and musical differences prior to the recording of Mechanical Animals, causing a rift in their friendship and a series of media feuds, but resolved it prior to the "Starfuckers, Inc." video, which Manson appeared in and co-directed. The two performed the song live in New York City at Madison Square Garden on May 9th, 2000. However, further feuding and mudslinging continued on and off for many years.

Question: Have you considered re-releasing any of your older albums with remastered tracks, b-sides, and other goodies? Antichrist Superstar turns ten years old next year. Is there any possibility of fans getting to hear an improved mix of this milestone album in the future?
Manson: I'd like to say yes, but there’s a legal matter pending that I can’t say too much about. It’s very hard to believe this, but representatives from Nothing Records have indicated that they are not able to find, or have lost the master recordings to my first three records. It's not something that you would ever let happen in musical history. I would imagine something like that could only be intentional. If not intentional, it would have to be done only through complete disregard. Now that Nothing Records doesn't exist, I think there’s only one of two people responsible for that. Out of those two people, there's only one that really has an opinion of me that is voiced very often.
I'm often painted as the bad guy in a relationship—in most relationships. I will not deny that I am an asshole at times. I will not deny that I'm probably completely insane, and most people will agree with that. I don't betray people that I care about. I don't forsake people that are important to me and I would do anything for someone I love. I don't know what kind of people do things like that. It's erasing history. It's erasing your life's work. It's killing a part of you. I don’t know how to react to it. I'd just like to wait and see what happens because it may be just a terrible mistake. I would hope so for those involved. [1]

This is a jab at Manson, who did a straight-forward cover of Depeche Mode's "Personal Jesus." "Personal Jesus" has been covered by numerous other artists including Johnny Cash. 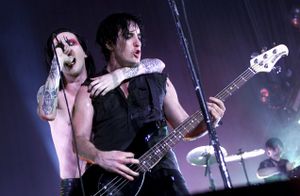 Manson singing "The Beautiful People" with Trent Reznor during Fragility v2.0 at Madison Square Garden on May 9th, 2000.

In 1997, Marilyn Manson was tapped to produce the soundtrack to the film Lost Highway. Reznor would end up getting the job, a move that Manson found hard to forgive. Over the next two years, Reznor and Manson exchanged harsh words but in 2000 they seemed to reconcile their differences, citing what they perceived as a threat to modern music: the resurgence of boy bands and the rise of "nü-metal."

The first sign of this reconciliation was Manson's presence and co-directing credit for Nine Inch Nails' "Starfuckers, Inc." music video. Later that year, Manson made a surprise appearance at Nine Inch Nails' concert at Madison Square Garden in New York City, joining the band at the end of "Starfuckers, Inc." before performing "The Beautiful People." The reconciliation did not last long, however, as soon after, they were once again exchanging barbs at each other through the press and their websites.

Reznor and Manson continued their feud. Reznor has called Manson "unhealthy to be around" while Manson doesn't understand why they're fighting but adds that he's more "dangerous" than Reznor despite Reznor's muscle gain in recent years. It is widely believed that Manson's drug and alcohol consumption are a major factor in Reznor's unwillingness to reconcile. In early 2009, Trent was quoted calling Manson a "dopey clown" and that his skills and wits of writing have been dulled due to substance abuse, though firmly believes he has a good talent. Manson responded by making a passing mention and a joke about the nickname later on in the summer in an interview.

In an interview in January 2011, Reznor was asked if he would ever work with Manson again. He responded by saying he was open to anything and that his former protégé "is a talented person" and that "we’ve had our problems, but I wear suits… I'm an adult now."

In a 2012 interview with AZ Central when asked about if a future box set was able to be released without any issues with Interscope Records and Reznor, Manson stated, "No. That part of the whole record deal on our end is through. The only unfortunate part of that is that some of the mixes have been destroyed. But he didn't destroy the mixes I care about. I don't have any bad feelings towards him. I really don't. He helped put me out into the world and I went my way and whatever happened happened. I don't think you should go back and fix things that have already been done anyway." When asked if there would be no hard feelings if Reznor and Manson did cross paths, Manson said, "No. I don't think there is tension. I don't think we ever really had a lot in common. We had a certain sense of humor in common. He was always more of the jock and I was more of the burnout."

During a 2017 appearance on The Howard Stern Show, Manson claimed that the rift between himself and Reznor was healed, that Reznor had reached out to him via Tyler Bates, and also mentioned that he still had the masters for Antichrist Superstar.[2] In another interview with Zane Lowe conducted that same week, Manson stated that he would love to work with Reznor again.[3]

After abuse allegations were leveled against Manson in February 2021, Reznor denounced Manson.