"Starfuckers, Inc." is the sixth track on the right disc of The Fragile. While the lyrics portray a take on pop music celebrities in general, Trent Reznor has stated that the song also refers to Marilyn Manson and his lifestyle.

The song started out as a drum loop that was created by Charlie Clouser for use in the Tapeworm project.[1]

The "Buddha Boys Choir", credited for background chants on this track, comprised Keith Hillebrandt, Clint Mansell, Steve Duda, members of New Orleans band Deadhandsystem, and various Nothing Studios employees. The impromptu group's name in the liner notes comes from Igor's Buddha Belly, a bar across the street from the studios.

The word "Starfucker" was apparently the original title of the Rolling Stones song "Star Star," released on the 1973 album, Goats Head Soup. The term "starfucker" was later used by the artist Tori Amos in her song "Professional Widow," released on her 1996 album, Boys For Pele. In this song, the eponymous "professional widow" and "starfucker" is widely considered to be Courtney Love. "Starfucker" is also the tenth track on Hanzel Und Gretyl's 1997 industrial metal album Transmissions From Uranus.

This is the version found on The Fragile. Slowly fading in with a quiet beat and moving synthesizers, the first verse then erupts, with locked drum loops and synthesized bass. Reznor's verse vocals were recorded and cut in such a way that each word sounds like it is from a different vocal take, possibly as a stab at the pop music celebrities the lyrics seem to satirize. In contrast, the chorus is loud and guitar-heavy, with several repeated group shouts. A wah guitar solo similar in sound to the one from "The Wretched" connects to the second verse. After the second chorus, the song quickly quiets for the lonely guitar-and-vocal bridge before erupting back into the loud chorus.

Released exclusively through Apple Music as part of The Fragile Instrumental, this is the album arrangement, but also retains the ending KISS sample used on the single version, with an earlier fade out. It lacks the KISS "Woooooo!" and the "Complication" guitar.

The Fragile: Deviations 1 version. This is about 25 seconds longer than the Apple Music version. The ending lacks the KISS "Woooo!", but still has the crowd noise overdubbing with the girls chanting "Nine Inch Nails!" However, that overdubbing ends after the girls, and the original KISS track applause continues, including the crowd chanting "We want KISS!"

Starfuckers, Inc. (The Day The World Went Away cassette)

This version has an extended ending, incorporating fireworks and applause from KISS's "Shout It Out Loud," found on Alive II, and the beginning guitar riff of "Complication" as the track fades out. It is also overdubbed with crowd noise (looped twice) that includes some girls chanting "Nine Inch Nails!" The version on the cassette single lacks the "Complication" guitar, and the overdubbed crowd noise continues on instead of looping, with larger crowd chants of "Nine Inch Nails!" in the audience.

In this heavily edited version, it fades in half as fast. The word "bitch" is censored, as is the word "fuck" - during the chorus, it is silenced. The guitar solo that comes next is cut in half. In the second verse the word "fucking" is censored, as is "asskisser". Also censored is the word "suck", but, interestingly enough, the word "whore" is not. During the loud chorus at the end of the lonely bridge, an added guitar that plays nine times in the studio plays only four in this edit. Also, at the very end, a part that plays thrice plays only twice. However, at the end of this edit, there is the KISS extended ending, but it fades out sooner.

This is a heavily censored version, released on the Starsuckers, Inc. promo disc. It incorporates all the censorship and edits of "Star***kers, Inc.", except that the word "starfuckers" is replaced by "starsuckers" throughout. It does not include the KISS ending.

This is a heavily censored version, released on the Starsuckers, Inc. promo disc. It is identical to "Starsuckers, Inc." except that the bridge verse is changed from the Carly Simon lyrics. While this is ostensibly the version used in the music video, the music video actually contains additional censorings: "suck you" (instead of just "suck") and "taste" in the second verse.

This remix integrates siren noises and various noises reminiscent of old sci-fi movies, as well as samples from "Shout It Out Loud" by KISS (from Alive II.) It has very little in the way of lyrics, consisting only of "starfuckers," "starfuckers, incorporated" and "you're so fucking beautiful."

This is a more dance-oriented remix, with emphasis on percussion and melodic synthesizers.

A more industrial remix, this is very heavy on percussion and light on lyrical content.

Starfuckers, Inc. (And All That Could Have Been)

This live version is similar to the album original, with the exception being an extended bridge that features Reznor declaring, "Well, fuck you!" after repeating "Don't you?" many times. The tempo is also increased from the album's 146 BPM to 159 BPM.

An Easter Egg on the DVD includes a performance of this song at Madison Square Garden in New York City on May 9th, 2000 with Manson. It then goes into a performance of Manson's "The Beautiful People." They had re-established a friendship, which did not last long after that performance. 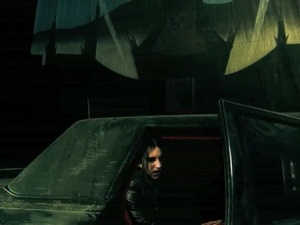 Screenshot from the "Starsuckers, Inc." video

The music video for "Starfuckers, Inc." was released in 2000 under the name "Starsuckers, Inc." due to censorship issues. The interlude lyrics were also changed for the video, allegedly to avoid a copyright infringement lawsuit. The video was co-directed by Robert Hales and Marilyn Manson.

SPOILERS BEGIN
A glammed-out Reznor and a strung-out, leggy blonde are riding in the back of a limousine. They stop at a run-down carnival at a trailer park, hosted by a one-armed dwarf, and participate in the games there. These games include smashing plates bearing head shots of popular musicians, throwing CDs in a toilet, breaking busts of various musicians (including Reznor himself), and a dunk tank that involves a large man dressed like Courtney Love falling into a tank filled with toxic waste.

At this point in the video, it becomes a commentary on the state of music at the time. Bands like Limp Bizkit were extremely popular while Smashing Pumpkins and R.E.M. seemed to be past their prime in the eyes of the record labels and many consumers. After the dunk tank, Reznor and the blonde return to the car. It is then that the blonde is revealed to be Manson dressed in drag. Many people speculated that the feud between Reznor and Manson had ended.
SPOILERS END

The video contains several references to the films of David Lynch. The opening scene with the road and the red-tinted scenes refer to Lost Highway. The limousine and Reznor's clothes and oxygen mask refer to the character Frank Booth in Blue Velvet, who has an addiction to gases and is the perfect figure of depravity. During the throwing of CDs into a toilet, discs are seen of Marilyn Manson's Mechanical Animals and Smells Like Children as well as Nine Inch Nails' The Downward Spiral.

In a 2005 interview with Kerrang[2], Reznor gave the following insight:

You start out thinking you can change the world, but when cool people at clubs who wouldn't even talk to me were like, "Whoah, he's got a platinum album, who's that guy?" It was strange. I realised that the guys who beat me up in high-school were now in my audience. Money, fame, power - things I'd never had - those things are recipes for massive personality distortion. In my life I was standing on the edge of a cliff about to jump off because my brain wasn't working. After The Downward Spiral I felt like I had to make the best record in the world but my addictions meant my head was packed with cotton. "Starfuckers, Inc." doesn't fit in with the rest of that record, but it came from bits of lyrics I'd written over a long period and was focused at Marilyn Manson and Courtney Love. I'm not saying I haven't fallen prey to this at times, but I think in their environment your priorities can totally flip before you realise.

"Starfuckers, Inc." made its live debut on November 14, 1999 and was played at the vast majority of shows on the Fragility tour, usually at a significantly faster tempo.

During the Live: With Teeth tour, the song was performed at about one-third of the shows, mostly early ones. Reznor stopped the song and skipped the breakdown, bantering to the audience before going right into the song's finale.

The screamed final line is not printed in the liner notes:

The first lyric to the second part of the first verse was changed on the actual recording:

In "Starsuckers, Inc.," the lyrics in the breakdown are changed to: