The second part of the Fragility tour, titled Fragility v2.0 took place between April and June 2000 in North America in support of The Fragile. This tour was documented on And All That Could Have Been. The opening act for this tour was A Perfect Circle. 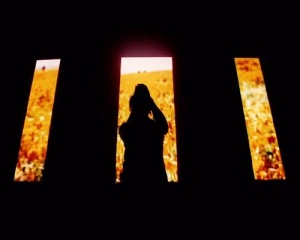 This tour featured three vertical LCD screens for three slow songs in the middle of the show, "La Mer", "The Great Below" and "The Mark Has Been Made". The visuals shown on the screens were provided by Bill Viola. The screens were also used during certain other songs with simpler visuals such as undulating shapes or fields of solid color/light. At the beginning of each show, the stage was surrounded with a scrim that was pulled away after the set intro.

A notable piece of gear was Clouser's custom keyboard stand, similar to the custom stand used by Reznor on the Self Destruct Touring Cycle, which could rotate in different directions and was fitted with a motorcycle shock absorber.[1] Reznor also had several custom guitars during this tour, with imagery from the album artwork on the bodies.

"The Big Come Down", "Get Down, Make Love", "Reptile" and "The Fragile" made a number of occasional apearances.