"Sin" is the seventh track on the 1989 release Pretty Hate Machine. Remixes were featured on the Sin single along with a B-side (a cover of Queen's "Get Down, Make Love"). The song is often amped up when played live, usually featured at the beginning of setlists.

The "sha" samples used at the beginning and end of the song appear to be from "Paid In Full" by Erik B & Rakim, though they may also have sampled the same original source. The line "Stale incense, old sweat, and lies, lies, lies" is a direct quote of Clive Barker from his short story "In the Hills, the Cities" from Books Of Blood, in which he uses it to describe old European churches.

This is the original album version from Pretty Hate Machine. The loud cry from the end of "Kinda I Want To" segues into the track as the hisses jump back and forth between the left and right audio channels, stereo panning being a prominent feature of the track. The song itself is very beat driven with much synthesized layering and uses the lyrics as the melody for most of the song, lacking any real "lead" parts. It's also notable for its unique sample of a loud whistling, which is most likely a sped up sample of a saxophone.

This remix is almost completely stripped of lyrics, save for the words "sin," "control," and "lies" scattered throughout the track.

This remix has extended instrumentals including a massively extended outro composed of what sounds like wind or running water and muted synthetic chimes.

This remix incorporates some of the elements of the "Long" and "Dub" remixes, but it has a more drawn-out outro. This version is used in the music video.

Sin (And All That Could Have Been)

This live version features a theremin solo during the introduction and live drums, otherwise remaining close to the studio arrangement on Pretty Hate Machine.

The song's intro seems to be performed differently by every NIN keyboardist. For example, Danny Lohner in the Woodstock '94 performance is seen playing an additional melody to the intro. During the Fragility tour, Charlie Clouser used a theremin before the guitar intro is played, while Alessandro Cortini's performance of the intro is a tad closer to the original. Other than that, the rest of the song is performed closely to the album version in most live performances, though when Jeordie White played the song, he played its harmonic progression on bass guitar rather than the keyboards used in most other live arrangements. The persistent high-pitched percussion loop from the "Long", "Short" and "Dub" mixes is also usually present in the live iterations. 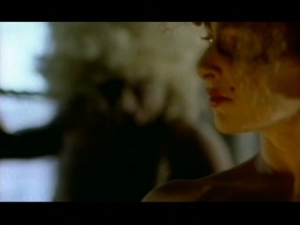 Screenshot from the "Sin" video

A music video was released in 1990, using the "Short" remix of the song. It was directed by Brett Turnbull. The video contains two women dancing with each other at the beginning before cutting to the main focus of the video. A woman, nude except for what looks like straps to spelunking gear and a halogen lamp, walking a shirtless, wrist-bound Reznor with a bag over his head through what looks like an industrial warehouse complex. He is then strapped into an aerotrim where she spins him throughout the remainder of the video. These scenes are intercut with two young gay lovers, a man and woman wearing ritualistic dressings and dancing, as well as visuals of pierced genitalia (both male and female), all reflecting the song's dark, sexual aspects.

The video was banned from MTV and most major outlets. A partial version of the video can be found on Closure. There were reports that the complete video was shown at dance clubs in the early 1990s and can now be found on the internet, as the full video became available through TVT's website.[1] [2]

On the final album version, the placement of the words "defaced" and "disgraced" in the second verse is switched.