During a podcast with Skinny Puppy's cEvin Key, Danny Lohner revealed that "Somewhat Damaged" was written and originally demoed around the time of "The Perfect Drug".[1] 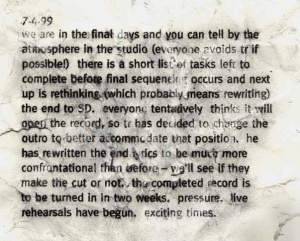 Journal entry from The Fragile sessions in 1999 published on nin.com detailing the revision of the end of "Somewhat Damaged."

Journal entry from The Fragile sessions in 1999 published on nin.com detailing further work on "Somewhat Damaged" and also the unused music video for "The Day the World Went Away."

Like "Mr. Self Destruct" on The Downward Spiral, "Somewhat Damaged" introduces the listener to the album's sonic structure. The song is dictated around its simple four note guitar riff, with the first half of the song written in a 9/4 (or a repeating 3/4) time signature. It opens with an acoustic guitar playing the simple riff and layers of abstract sounds slowly fading in. The drums enter, while more acoustic guitars are layered in, echoing the primary guitar. After the first two stanzas, a small interlude occurs, during which the acoustic guitars are replaced with heavily distorted guitars. Reznor's screaming abilities are put on display as the majority of the lyrics are now shrieked out. The last third of the song is written in 4/4 (or a 4/4 time signature superimposed over a 3/4 time signature), while the lyrics are sung in a clashing time signature. These final, peculiarly-structured lyrics are sung over the cacophony of instruments, which then quickly give way to a crescendoing chorus synth sampled with Trent Reznor's voice. The introductory drone of "The Day The World Went Away" also fades in at this point.

Released exclusively through Apple Music and later on The Fragile: Deviations 1. Has a different arrangement to album version.

Somewhat Damaged (Beside You In Time)

This live version is amongst the bonus footage on Beside You In Time. The intro is very different from the album original, featuring a percussion synth that fades in as the crew finish setting up the stage.

"Somewhat Damaged" made its live debut on November 14, 1999. On the Fragility Tour, the song was played at about half of the shows, and performed pretty much the same as the album version, with Reznor on the guitar.

However, beginning with the With Teeth Summer Amphitheater Tour, and for every subsequent performance, Reznor significantly reworked the song's live introduction. The reworked introduction starts off very minimalist, with Reznor singing almost a cappella over just a simple synth rhythm line. The new introduction eschews the album version's heavy kick drum entirely, and the guitar line and tom-tom drums aren't brought in until the second stanza. The full instrumental complement of the album version isn't brought in until the end of the second stanza, which makes for a more impactful contrast with the subdued introduction.

"Somewhat Damaged" has been played live multiple times on every tour since except the Lights In The Sky Tour, but has only been a staple for the summer 2006 leg of the With Teeth tour and the Tension 2013 Tour.