In the Summer of 2006, Nine Inch Nails embarked upon its Summer Amphitheatre Tour (also called the Inconvenient Truth Tour), featuring supporting artists Saul Williams, Bauhaus, TV On the Radio, and Peaches. The tour is part of the Live: With Teeth tour. Each performance (except 5/26 in George, WA) had a unique poster for sale. 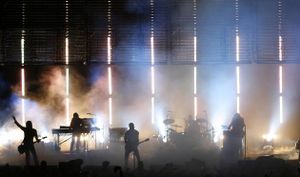 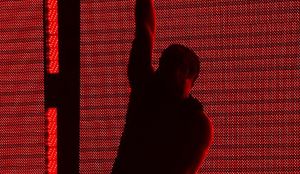 Trent Reznor in front of the light panels during "Closer."

The lighting for the summer tour was a change from the winter and spring "teeth" panels. A grid of Versa RAY pixel lights arranged in a cage hung over the stage, occasionally moving down and up to display visuals, through which the band may be seen. Seven large, vertical, immobile rectangular panels were in the background akin to the three mobile ones from Fragility 2.0.

Signature aspects of this tour, omitting the usual suspects:

The following is a setlist breakdown for this leg of touring, a,b or c indicate that these songs are played instead of each other, or occasionally together.