"Burn" is a song initially written for the Natural Born Killers Soundtrack, which was produced by Trent Reznor. It is a very intense track containing lyrics with anti-social and angry themes.

The original album version is on both the Natural Born Killers soundtrack and the Deluxe Edition of The Downward Spiral. Similar in tone and structure to "Closer To God," the verse and chorus sections of the song are then mediated by a fast, guitar-driven bridge that occurs both in the middle and at the end of the song. Both the verses and choruses are sung through a vocal distortion effect. The drum loops at the end fade out, allowing the layers of noisy distorted guitar to repeat until suddenly cutting off.

Burn (Beside You In Time)

The live version found on Beside You In Time and played throughout the With Teeth Arena Tour uses a new set of percussion loops, manipulated live by Alessandro Cortini before the verse drum rhythm joins in. Its guitar-only ending segues directly into "Gave Up." 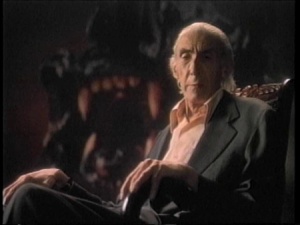 Screenshot from the "Burn" video

The music video for "Burn" is similar to the various screen projections used throughout Nine Inch Nails tours. Directed by Hank Corwin and Reznor, it features images of people, nature, and general destruction and decay interspersed with images from the film and Reznor singing. The video incorporates clips from Natural Born Killers and is filmed in such a way that the video mimics the film. According to IMDB.com, the Natural Born Killers clips are actually footage that was cut from the film.

This song made its live debut on August 11, 1994 and has become a staple of the live performances for years, though it has been played differently throughout the various live lineup changes. During the Self Destruct Tour, it was played like the album version, including distorted vocals. During the With Teeth era, it featured more radical changes: the percussive loops were heavily manipulated by Alessandro Cortini on a custom Kaoss pad, and the synth line was played by Jeordie White on bass. During the Wave Goodbye Tour, the regular album loops were manipulated by Reznor before the rest of the band kicked in. As well, the synth line was played by Justin Meldal-Johnsen on keyboards once again. During the Tension 2013 Tour, this song featured backing vocals by Lisa Fischer and Sharlotte Gibson.