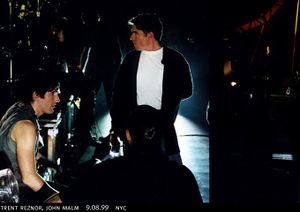 John A. Malm, Jr. is best known as Trent Reznor's former manager and co-founder of Nothing Records. In spite of the eventual legal tangles between Malm and Reznor, Malm was among Reznor's thanks during his acceptance speech when Nine Inch Nails was inducted into the Rock And Roll Hall Of Fame.

Malm was born in Cleveland, Ohio, where he grew up and attended Denison University, achieving a degree in Mass Media Communications. He worked as a manager for his university radio station during his time at Denison.

Malm began his artist management career after college by managing several local acts, including Lucky Pierre and System 56. He soon became the full-time manager of the local band Exotic Birds, which Reznor was a member of at the time. Malm and Reznor left the Exotic Birds in 1987, and Malm quickly picked up Reznor as a client after hearing his Pretty Hate Machine demos. Malm and Reznor eventually signed onto TVT Records. [1]

After having contract disputes with TVT, Malm and Reznor formed Nothing Records, and jointly released Broken with TVT. This would be their last release with the latter, as they then made an agreement to be released through the major label Interscope. This agreement continued as both Malm and Reznor saw great success throughout the 90's, signing several big acts and personal favorites to Nothing, such as Marilyn Manson, Pop Will Eat Itself, and Prick.

Over several years leading up to the release of 2005's With Teeth, Malm sued Reznor for unpaid commissions throughout his career, totaling $2 million. The newly sober Reznor counter sued Malm for financial mismanagement. Reznor alleged that Malm took advantage of his addictions and manipulated him into signing unfair agreements. During this time Reznor signed an agreement which entitled Malm to 20% of his gross earnings for an indefinite time, even if Reznor chose to seek new management.

On May 27, 2005, the court eventually ordered Malm to repay Reznor $2.95 million plus interest in lost earnings and damages. Factoring the interest in may double the amount awarded to Reznor. Malm can still appeal the verdict if he chooses.

Reznor has made several subtle and direct comments about the situation with Malm.

The Associated Press reported that in court, Reznor said: