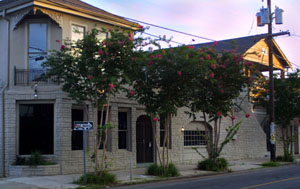 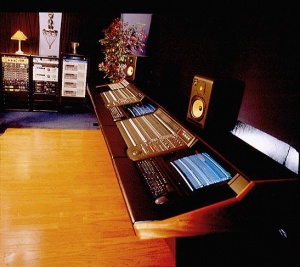 Nothing Studios is a former funeral home that was the base of operation for Nothing Records, owned by John Malm and Trent Reznor.

The studios, located at 4500 Magazine St. in New Orleans, were apparently not seriously damaged by Hurricane Katrina. During an interiew on the Los Angeles radio station KROQ, Reznor stated that the building was not a studio anymore. Later, a collection of his photos were put on nin.com, detailing the aftermath of the hurricane on his former studios and the surrounding area, before Nine Inch Nails played a scheduled concert (which had become a benefit for the survivors).

While writing The Downward Spiral, Reznor lived in the Tate mansion where the Manson family murders took place. After he moved out, and it was demolished, he went back and took the door as a souvenir. It became the front door to Nothing Studios.

Reznor relocated to Los Angeles in 2004 and the former site of Nothing Studios was eventually put up for sale, for approximately $1.3 million. The property was purchased in 2010 for $900,000 and will be converted to office and retail space.

List of clients who have reportedly visited Nothing Studios: