Album:Broken
Length:5:07
Tempo:91 BPM
Versions:Suck
Throw This Away
Suck (Pigface version)
Suck (Live)
Suck (And All That Could Have Been)
Live:Hate Tour through NIN 2013 Festival Tour,
Cold And Black And Infinite Tour through present 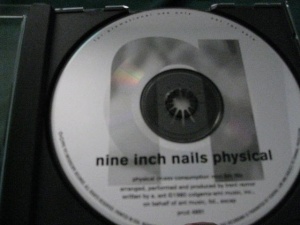 "Suck" is the second hidden track on 1992's Broken EP. Originally packaged with "Physical" on a Mini CD sold with the EP, it was later incorporated onto the EP as a hidden track after allegations that some music stores were removing the Mini CD and selling it separately. "Suck" is track 99 on Broken while "Physical" is track 98.

"Suck" was originally written and performed by Pigface, a band lead by Martin Atkins and featuring Trent Reznor as well as many other notable industrial musicians. Other notable singers of the song within Pigface include Nivek Ogre of Skinny Puppy, who even shared the song as a duet with Reznor. Since 1994, it has become one of the regular songs played by Nine Inch Nails.

NIN recorded a new version of the track, as Reznor was unhappy with the original and felt that it was unfinished and too minimal.[1] The multitracks for the original Pigface version of the song were released for a remix contest. While this song appears on The Definitive NIN - The Singles, it was never released as a single or promo.

This is the version found on the Broken EP. A loud and guitar-driven, screamed chorus contrasts with a danceable and funky verse throughout the song, mediated by a quiet, bass-led bridge that eventually builds into a loud synthesizer solo before the final chorus. Afterward, the song returns to the funky verse, but remains instrumental. The beat stops, then is cut up and spliced as Reznor whispers the final lyrics, ending the song.

This minimalist remix, on Fixed, contains elements from both "Last" and "Suck." Opening with bubbling synthesizer loops, it mostly consists of the bass riff from the middle of "Suck," which is repeated throughout the track. Layered below it are various quiet vocal samples from both songs. Eventually, the drum beat featured at the very end of the original bridge in "Suck" is looped and fades in, eventually segueing directly into the ending of Butch Vig's mix of "Last."

This original recording features Reznor on guest vocals. Musically, the song is nothing like the Nine Inch Nails recordings of the song, characterized instead by drums and bass. Its multitracks were those released for a remix contest by Pigface.

This live soundboard recording is from a Nine Inch Nails performance at an unknown date, likely from the Sin or Hate tours. It was originally released on the TVT Sampler Summer 1991 cassette, but as that was a promo with limited distribution, it was popularized in the NIN fanbase by its inclusion on the Halo 00 and, later, Demos and Remixes bootlegs.

Suck (And All That Could Have Been)

This live version is similar to the album version, but the ending is shortened, with Reznor shouting "Suck!" repeatedly rather than singing the song's final lyrics or returning to the verse beat and bassline. Also, the line "I'm Jesus Christ on ecstasy", Trent changes to "I'm Jesus fuck on ecstasy".

"Suck" made its live debut on May 22, 1990. It was played occasionally during the Pretty Hate Machine era, and has become a regular in the set since the Self Destruct Tour. It is most consistently played the way it appears on And All That Could Have Been. During the Pretty Hate Machine Tour, a sample from the 1967 film The Trip ("I've got the sun in my hands, man...") was used at the end of the song.