How To Destroy Angels Live 2013 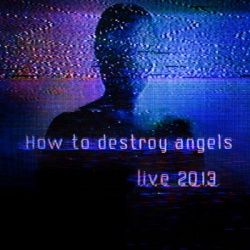 How To Destroy Angels Live 2013 (stylised as "How to destroy angels live 2013") is How To Destroy Angels' first tour, a limited North American run of dates including performances at Coachella. Tickets went on sale on February 27th through tour.destroyangels.com as a presale, but due to unprecedented demand, general sale for some shows was also opened that day.

The Coachella shows were initially meant to be one-off, standalone performances, but the amount of money and work put into the production was large enough that an actual tour was planned instead.[1] Originally, DIIV were to be the support for all shows except Denver, but had to cancel on multiple occasions for travel issues.

Two festival dates, Mountain Oasis Electronic Music Summit and Voodoo Festival, were scheduled to finish off the tour, but the band cancelled because of what they referred to as unforeseen production conflicts.[2]

The setlist for every show was identical, save for Coachella which did not include the encore. The shows also premiered the remix of "The Space In Between" (entitled "Between The Spaces") by SONOIO. The remix was released on May 1st 2013, the day after the final non-festival show of the tour.

The live effects for HTDA were created and controlled live from stage by Rob Sheridan, who co-designed them with Roy Bennett and Moment Factory (who had helped design the visual effects for Nine Inch Nails' Lights In The Sky Tour). A series of tubes filled with LEDs were used as curtains over the stage to create immersive, interactive light effects to complement and work alongside the live music provided by the rest of the band.

A post on the band's Facebook page reveals that their white stage clothing was chosen to enhance the visuals, stating that, "Our stage outfits are white because the projections pick up much better on white. It's part of the show. In real life, you won't find any of us in white very often."[3]

The show was broadcast live by Coachella on YouTube, as part of their livestream programme. Whilst the band played the festival twice, the live performance from the first performance was used twice.

The setlist for Coachella was identical to all other shows of the tour, except lacking the Encore. The stream was taken down by Coachella once the festival had ended, and a small selected number of videos from the show were put onto YouTube in its stead.

This One Is On Us

The This One Is On Us fan recording project received permission from the band and venue to record the Chicago night on professional cameras. The announcement was made on the Echoing the Sound forums:

"So, since it's now on and everyone's in place, I think now's a good time to announce what we've been up to...

TOIOU is back up and running, with a full crew for editing and color coding live video, and is working with RITC to record tonight's show.

Rob Sheridan has very kindly worked with us to get us in with pro camera's to film tonight's HTDA show. We have 7 cameras filming tonight - 2 EX3's, 2 EX1's, a FS100 and 2 DSLRs, with possibly more angles coming from tapers that are arriving independently. We also have several mics in the crowd and will hopefully get something official from the band to make up a great audio track for the recording. Basically, we've emptied the TOIOU bank account to pay for the rental of these cameras so that we can get the best quality recording possible. I'm sure we'll work out how to get that cash back at some point, but the very point of the account is to have money set aside for projects such as this, so it's money well spent.

A big tip of the hat to Ryan @ [Reflecting in the Chrome] for stepping up and organizing the team in Chicago. I don't know about you, but I'm definitely looking forward to seeing what the team can produce. Ash512, Alex(shitfuckdamn) and at least one other person will be editing with a few other people stepping in in other technical roles (apologies for not naming, i don't remember half their screen names and don't want to use real names without permission).

I'm sure Ryan will update us all on how the night has gone later. 'til then..."

Six posters were created by Rob Sheridan for the tour. They were sold throughout the tour, both signed by the full live band and unsigned. Whilst the artwork different amongst the posters, the tour dates were the same for all, although only one version was sold per night.