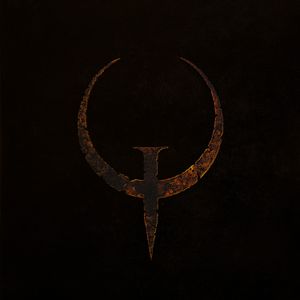 Quake is a video game by id Software released on June 22, 1996, which features music by Nine Inch Nails. NIN was also responsible for the game's sound effects. The soundtrack was remastered and reissued in 2020 on vinyl and digital.

Historically, there was confusion as to whether the music was credited to NIN or Trent Reznor alone, but this was cleared up by id Software designer American McGee[1] and by the 2020 edition. It is notable that this soundtrack contains ambient music, which Reznor went on to explore further with the Ghosts series and various scores created with Atticus Ross. It is also reminiscent of the dark ambient music of Coil.

On September 16th, 2020, it was announced that the Quake 12" 2xLP would be available for sale via the nin.com store. Per John Crawford on Echoing the Sound, it was confirmed that the release has the Null 0.5 release number. The packaging credited the music to Trent Reznor and Nine Inch Nails, and listed Charlie Clouser, Robin Finck, Danny Lohner, and Chris Vrenna as having been involved. The final, blank side of the vinyl is etched with program code from the game. A digital release was also made available on December 4, 2020.

Reznor also posted the following to nin.com, which was later removed:

*NOTE
WE DESIGNED THIS REISSUE TO INCLUDE A BOOKLET CONTAINING ESSAYS FROM ID SOFTWARE’S JOHN CARMACK AND AMERICAN MCGEE. A CERTAIN UNNAMED VIDEO GAME PUBLISHER MADE IT IMPOSSIBLE TO INCLUDE THIS IN THE PACKAGE, SO PLEASE HONOR THEIR WISHES BY NOT CLICKING HERE TO EVEN SEE THE ESSAYS OR HERE TO PRINT THE BOOKLET OUT FOR YOURSELF.

Until the 2020 release, there were no official names for these tracks, as they were untitled in the accompanying game literature.[2] They were referred to by their track number; however, because the first audio track is the CD's second track (the first being reserved for the actual game data), this usually led to confusion.

Alternatively, fan-made titles and game level names are often brought up when CD ripping/playing software looks up the information on the CDDB, and some of them ended up being the official titles. The official titles were uploaded to the CDDB at least as early as 2000, and were likely provided by someone at Nothing Studios or id Software.

"Track 2" plays upon completion of each level when statistics are shown (time spent, secrets, kills)

Reznor became involved as the result of mutual fandom between himself and developers at id Software. He was a big fan of Doom and had sent tickets and backstage passes to developers, expressing an interest in working on Quake.[3]

A particular weapon in game play is the "nailgun" which can be reloaded by collecting ammo boxes decorated with the NIN logo. Also, Reznor was the original choice for sound design on id Software's Doom 3, but circumstances halted his involvement. Former NIN member Chris Vrenna composed the game's theme song.

The game's readme mentions something called Nothing Interactive, an entity that has never been referred to on any other NIN or Nothing Records product.