From David Carson's book Trek. This shows a mock-up of Still in its original title Quiet.

The title may be referencing the Joy Division album of the same name, from which their song "Dead Souls" - covered by NIN during The Downward Spiral era - comes. The album was originally intended to be called Quiet[3], a name that was later reflected in The Definitive NIN - Quiet Tracks.

While the album was at one point available as part of the deluxe edition of And All That Could Have Been, it was also offered from the beginning as a standalone disc directly from nin.com. Its availability has been on and off since its release, causing extraordinary prices on eBay at times. The tracks are currently available through most digital outlets. 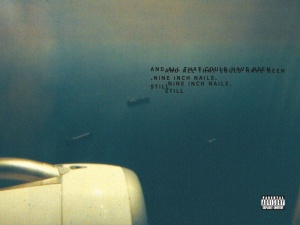