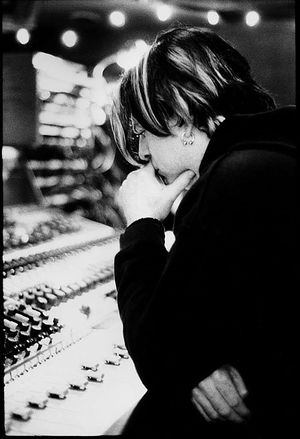 Sean Beavan is a record producer who has worked with Nine Inch Nails on several albums, such as Broken, Fixed and The Downward Spiral. He has worked on several NIN remixes, including "Closer to God" and "Screaming Slave" (although Trent Reznor misspelled his name as "Sean Beaven" at remix.nin.com).

Beavan began his career as a musician and engineer in his hometown of Cleveland, Ohio, playing bass and singing in various local bands. While working as an engineer at The Right Track Studio in downtown Cleveland, Beavan met Reznor who worked as house programmer. Trent also played keyboards in several local bands that Sean mixed. Beavan was then asked to mix the demos of what was to become Pretty Hate Machine and went on to mix NIN's sound during their live concert tours for many years, eventually becoming an unofficial member of the live band (even singing live backup vocals from his place at the mixing console).

Trent invited Sean to work on The Downward Spiral as well as mix several songs on Nothing Records artist Marilyn Manson's debut record Portrait of an American Family. After contributing to several NIN remix releases, Sean mixed and co-produced Marilyn Manson's Antichrist Superstar with Reznor. In 1996, after 8 years, Sean left the NIN camp to mix front of house for the "Antichrist Superstar" world tour, and work with various other bands.