"Happiness In Slavery" is the fifth track on 1992's Broken EP. It was also released as a promo single and controversial music video. The title is evidently taken from the preface of the bondage novel The Story of O.

This is the original album version. It is characterised by heavy use of loud, layered percussion loops; in fact, the bridge of the song is completely constructed from percussion patterns and synthesized machinery sounds as well as Reznor's distorted voice. Guitars are featured prominently during the verses and choruses, the latter also including synthesized bass. Each verse is punctured by screamed backing vocals. The repetitive buildup at the end of the song eventually gives way to quiet whispers, which segue into "Gave Up."

This remix contains samples from the album version as well as from performance artist Bob Flanagan. Repetitive in nature, it contains very few lyrics, instead focusing on the percussion loops and synthesized bass and leads, similar in sound to "Heresy."

This remix is very different from the album version and the other remix on Fixed, and also incorporates samples from Flanagan. It is cut up and spliced so that it seems more like a sound collage than music.

Short in length, this remix loops only few elements of the original, incorporating new synthesizer elements and film samples on top. It can only be found on the Happiness In Slavery promo.

This remix is done in a similar fashion to the "Dub" mix of "Sin", with the words "slave screams" and "submission" repeated at various points during the track. This remix was initially found only on the Happiness In Slavery promo, but was later posted to remix.nin.com by Reznor.

Happiness in Slavery (Live at Woodstock '94)

A recording from the Woodstock '94 performance can be found on the official Woodstock '94 CD and VHS, including an introduction from comedian Calvert DeForest. At the end of the song, it fades out over the intro to "Head Like A Hole". 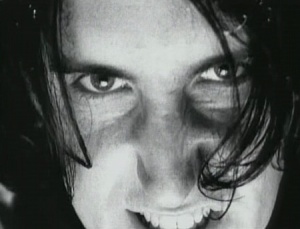 Screenshot from the "Happiness In Slavery" video

Jon Reiss directed the award-winning "Happiness In Slavery" music video, which was released in 1992. Shot entirely in black-and-white, the video's stark contrasts and stunning visual effects leave a memorable imprint to the viewer.

SPOILERS BEGIN
A man (played by Flanagan) enters a room. He's dressed in a suit and tie and surveys the room before placing a flower in a small vase on a shelf and lighting a candle next to it. He then undresses, carefully folding each piece and placing it on a table under the shelf. Now completely nude, he walks over to a small wash basin, above which is a mirror. He dips a washcloth into the water and cleans himself, then pauses and looks in the mirror. He then walks over to a strange device in the middle of the room and lies down on it.

Suddenly the device springs to life and the man is in a reclining position. Shackles come down over his wrists and ankles as needles start poking into his hands. He looks on with anticipation and reacts with both pain and pleasure. A clamp and pincer begins to pull at the man's genitalia. More pincers begin pulling at his skin and ripping it out, which seems to be bringing the man an increasing amount of pleasure. Drills emerge and drill into his flesh at various points, with the blood dripping to the floor. The floor seems to be made out of dirt and there is a strange little garden underneath the device that seems to be fertilized by blood.

Finally, grinders emerge and grind at the man's skin. There is a final flurry of pain and ecstasy before he is finally dead. The machine then engulfs the man's body, grinding it into a fertilizer for the garden. The machinery has washed itself and awaits the next victim.

At the end of the video, another man (Reznor), dressed in similar attire, enters the room, and begins the same ritual as the previous man.
SPOILERS END

The video was universally banned due to its extreme violence and full-frontal nudity. There is a rumor that the only part of the video that was not real was the final sequence in which the man is engulfed by the machine. In reality, the poking and pulling were pretty much the only "real" aspects to the video. Reiss is fascinated with hydraulics, and it clearly shows with this video. The blood and gore were created by mashing bananas and mixing them with chocolate. This would look more realistic when photographed in black-and-white.

The concept for the video was inspired by a novel called The Torture Garden by Octave Mirabeux.[1] The video was originally going to be directed by Shinya Tsukamoto[2], whom Reznor would later work with on "TOH (Top Of The Hour)" and "Theme For Tetsuo: The Bullet Man", two instrumental pieces credited to Nine Inch Nails.

"Happiness in Slavery" was a set staple during the Self Destruct tour, and usually concluded with a lot of destruction by the band after an extended outro. During later dates on the Performance 2007 tour, samples from the song began to appear in the end of "The Great Destroyer." The song was played live again for the first time since 1995, during the Cold And Black And Infinite Tour in 2018. For this iteration, Reznor used a bullhorn on the high-pitched screams of "slavery!" during the outro.

Extra lyrics are whispered at the end of the song: