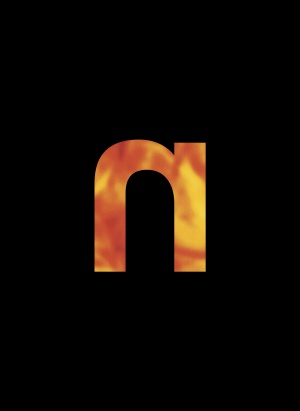 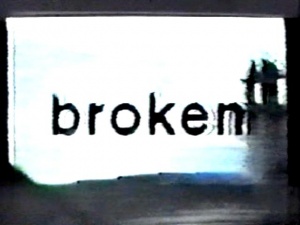 The Broken Movie is a short film made in 1993 to promote the Broken EP, released in 1992. It is presented as a snuff film, about 20 minutes in length, interspersed with Broken’s four music videos and includes its own video for the song "Gave Up" as its conclusion. The movie was filmed and directed by Peter Christopherson.

The film involves a young man being kidnapped and made to watch Nine Inch Nails videos while being tortured. Trent Reznor once said that the Broken Movie "...makes 'Happiness In Slavery' look like a Disney movie". Much of the cast, save Bob Flanagan in "Happiness In Slavery" and the band itself in "Wish", is unknown. The film was inspired by scenes from Henry: Portrait Of A Serial Killer.[1]

* This version is different than the one included on Closure.

For info on the actual music videos, see the individual song pages.

***SPOILERS BEGIN***
The film opens with the aggressor walking along a platform until he stops on a trap door, the camera shows a noose around his neck and shows an eerie expression on the man’s face as the trap door opens and he begins to fall. The camera then cuts to views of a neighbourhood passing by as it is filmed from a car window until it slows down when a man (the victim) is caught on camera. The next is image is that of the victim tied to a chair and sat in front of a television, where he is forced to watch NIN videos.

Following the "Pinion" video, the film cuts back to the amateur video where the killer, wearing some kind of leather mask, violently drags back the victim’s head and forces him to drink some sort of liquid from a petrol can, mimicking the person in the music video who is forced to drink waste.

The middle of the music video is interrupted by the amateur footage with the victim chained to a big table with a large wad of dark substance on his face. As the killer can immediately be seen putting his pants on, it can be assumed that it's feces. The music video then commences and finishes; the killer then repeatedly rewinds it to the part where Reznor screams “fist fuck” and begins to rub his fist.

At this point in the film, the victim is shown still tied to the table as the killer proceeds to rip his victim’s teeth out, reflecting the man in the music video shown eating. In the most prominent VHS leak, this part was blacked out, probably as a way for Reznor to tell whose copy of the film had been leaked.

The film ends with a video for "Gave Up", different to the one on Closure, with the music simply dubbed over the storyline of the movie. At this point in the film, the victim is suspended from the ceiling and is repeatedly attacked by the perpetrator with a blade, and then with a blowtorch; the killer then slices off the victim's penis with a razor. The camera-work at this part closely resembles that of an amateur snuff film, while there is interspersed footage of the police searching through the basement and finding remains of previous victims. (At one point, a sign that reads "TRESPASSERS WILL BE EATEN" is shown.) Finally, the film cuts back to the victim strapped on the table, as the murderer hacks his limbs off with a chainsaw, proceeds to presumably rape him, and ultimately slices his chest open to consume his heart.

The movie then cuts back to the execution scene shown at the beginning of the film, where the killer is being dropped through the trap door, falling through a seemingly immensely long tunnel, until the rope tightens suddenly. The movie ends with the inverted version of the Broken album cover, with the background black, and a mirrored "n" character filled with the original orange background texture. After roughly a minute of silence and a black screen, the severed head of the killer is shown flying across the screen.

The movie also includes a copyright notice saying "1993 © Interscope Records", implying that the movie, at some point, was meant for an actual release.

Due to its extremely graphic content, the Broken Movie has never seen an "official" release. A copy was leaked in the 1990s and traded for years, resulting in many poor-quality, high-generation copies, and was later encoded and distributed through P2P networks.

However, on December 30 2006, someone leaked a high-quality DVD image on The Pirate Bay; it includes the video for "Help Me I Am In Hell," which none of the fan-made compilations did, because the first leak had the video dropped out. It was leaked online by the same user who uploaded the leaked DVD version of Closure and there is speculation that this version of the movie has been sourced directly from the master tapes and that Reznor himself is the source of the leaks, as implied by a post on his blog on The Spiral: "12/21/06 : Happy Holidays! This one is a guilt-free download. (shhhh - I didn't say that out loud). If you know what I'm talking about, cool."

In 2013, the Broken Movie was uploaded to the official NIN Vimeo account, but was promptly removed by Vimeo. It is currently available to download from archive.org.[2]

The "Gibby" referred to is most likely Gibby Haynes, formerly of The Butthole Surfers and Revolting Cocks.

Peter Christoperson on the Broken Movie

In an interview with The Wire magazine[3], Peter Christopherson explained how the movie came about and what his thoughts were on it:

What was the story behind the video for Broken? I heard that Reznor asked you to ‘do your worst’, so to speak.

After I’d made a couple of videos for them that were relatively conventional in the early 90s, Trent phoned me and said, Would I make the heaviest video ever made? So stupidly, of course, I said, “Yes I’d be delighted” and proceeded to do just that.

Coil had already done some remixes of Nine Inch Nails and they’d been used in Seven, the famous horror movie. So I was on pretty good terms with the guys and we put together a compilation for the Broken album of which the culmination was a track called “Gave Up”. Basically the video was what I intended to be a comment on the existence of snuff movies and people’s obsession with them.

And I did it without regard for MTV and what was showable and not showable, because that’s what he asked me to do. But when the video was finally assembled, the record company thought they would get into all sorts of shit if they actually released it, but Trent leaked a couple of copies to a video shop in Ventura Boulevard or somewhere, who subsequently made what I understand to be in excess of $20-30,000 bootlegging and selling copies of copies. So because Nine Inch Nails were in the charts with no video, it became one of the first viral distribution products, so loads and loads of Nine Inch Nails fans copied their copies and distributed them, because the net wasn’t really working for video then.

Because everyone was making bad dubs of bad dubs, what I considered at the time to be pretty obvious clues that this was a fake and actually making a comment about those things, were lost by the bad quality. So unfortunately a lot of people, especially kids, started to believe that it was a real snuff movie. By the time a VHS has been copied ten times you are hard pressed to make out any detail at all. You can just about see that there is a guy with a rubber mask and a chainsaw appearing to cut someone’s legs off, but you can’t really see anything else: you can’t see all of those clues that would actually tell you it was no more real than Saw 2 or Hostel 28.

So in a way I regret… it was never my intention to bring harm to people. I do think people can be harmed seeing things, especially unexpectedly, that put them in the position of empathising with someone being tortured and murdered. That’s a hard thing to watch. I guess it’s interesting that it’s achieved a certain notoriety. But to me, because truth has always been pretty important to me, I think that the way Hollywood presents horror as a Grand Guignol a sort of Theatre Of The Absurd, actually encourages kids to go, “Yeah, that was fucking awesome man, you could see their eyes popping out”, and whatever.

I think that does humanity a disservice because that suggests that you can be horrible and it’s a joke, whereas with what I’m trying to do, if it’s addressing the issue of man’s cruelty to man, there’s no doubt that my intention is to point out how appalling those things are, and what they look like for real. I don’t know what the statistic is of how many people get killed on American TV every second but it’s something horrendous. But because all of those deaths are shown in a plastic way, they don’t prepare people for what death is really like. Really, people in the West have no clue about the reality of death.