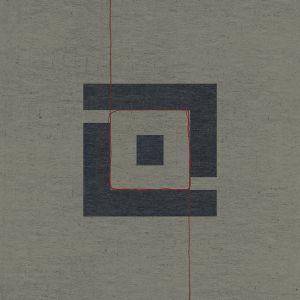 "Echoplex" is a song by Nine Inch Nails first released online via Facebook on May 2, 2008. It is the fifth track on the album The Slip, and is also included on the promotional 2008 tour EP, Lights In The Sky.

The artwork may symbolize someone being surrounded by sound, as if it were echoing around them. It may also symbolize walls around the person, which makes sense due to the lyrics making a reference to sound bouncing off of walls.

The lyrics suggest a scenario where someone has been in solitary confinement for too long, driving him or her, to insanity, where "you will never ever get to me in here." Another possible scenario is a direct link between the lyrics present on this song and "Demon Seed" ("You feel me breathe" on "Echoplex" vs. "I can hear it breathe"). They could also be extremely literal, referring to the solitude of wherever frontman Trent Reznor comes up with his music.

The bridge to the coda of the song features wind synthesizers similar to the one used in the introduction of "Wish," but do not appear to be the same sound. Echoplex is also the name of a specific brand of reverb units. Multitracks for this song (and all others from The Slip) were released in raw WAV format via remix.nin.com.

This is the only official version of the song.

This version of the song was released online via nin.com and PitchforkTV. It was filmed and recorded in the band's rehearsal space in mid 2008 and directed by Rob Sheridan. Josh Freese uses a Jazzmutant Lemur to create the opening drum loop before joining in himself with a different rhythm on top of the loop for the second verse. It also features on The Slip, on a DVD of rehearsal footage.

"Echoplex" made its live debut during the dress rehearsal show of the Lights In The Sky Tour and was performed on the encore of every show. It was also frequently used in the Wave Goodbye Tour. During the Lights In The Sky Tour, Josh Freese used a large touch screen at the back of the stage to simulate a drum machine to play the song's recognisable beat, an effect that wasn't without technical difficulties - breaking or malfunctioning at several concerts.

During the Tension 2013 Tour, this song featured backing vocals by Lisa Fischer and Sharlotte Gibson. "Echoplex" was revived on the NIN 2022 tour, after having not been performed since February 28, 2014.