March Of The Pigs (song)

"March Of The Pigs" is the fourth track on 1994's The Downward Spiral. It has one of the most unusual metres of any song to enjoy popular radio play, alternating three measures of 7/8 time with one measure of 4/4 time in the verses (in effect, a 29/8 time signature). The chorus is in the common 4/4 time signature. As a result, with eighth notes getting the count, the song has a BPM rate of 269. The chorus of this song shares its chord progression with the bridge of "Wish."

Lyrically, the song could be about society or NIN's fans, but Trent Reznor has stated in the interview bootleg titled Disturbed that the "pigs" in this song refer mainly to "anywhere from the media to people he thought were friends around him." Furthermore, he said, "The issue I was addressing was... when we attained a certain level of success, it was surprising to see the legion of people starting to fuck with you, can't wait to see you fail, hoping that you'll fuck up, ripping you off, trying to use you... The fact that American media, in 'underground world,' you go from being the darling to 'well, we accidentally started selling some records,' so they have to turn their backs on us." He also occasionally referred to fans as 'pigs' at live performances.

According to the Filter biography on their official website, former live guitarist Richard Patrick reportedly received the nickname "Piggy" while in Nine Inch Nails. As well, "Piggies" is a song on The Beatles' 1968 self-titled (or 'white') album, a noted influence on Charles Manson, who scrawled the word "pig" in blood on the front door of the Sharon Tate mansion wherein he and his 'Family' killed Tate and several others on August 8, 1969. The mansion was also where Reznor recorded The Downward Spiral in 1993-4 and Reznor kept the Tate door when he moved to Nothing Studios in New Orleans. However, Reznor debunked rumors of song connections to the Tate murders in an interview[1]:

I had "Piggy" written long before it was ever known that I would be in that house. "March of the Pigs" has nothing to do with the Tate murders or anything like that, I’m not going to say what it is about, but it’s not about that. Yeah, the name of the studio being "Pig", that was a definite bad taste joke. It was written on the front door at one time, I’ll admit to that.

March Of The Pigs

This is the original album version. Like much of the album, this song is structured around contrast: the loud and fast, oddly-metered and screamed verses are juxtaposed with the moodier, quieter bridge and piano-led chorus. It also samples buried screams from the films Sorcerer and The Exorcist II: The Heretic.

March Of The Pigs (Clean)

The radio edit deletes the word "fuck," making it safe to air on American radio stations.

March Of The Pigs (Instrumental)

Released by Reznor through his remix.nin.com account, this is unmastered version is the same as the album cut, save the lack of vocals.

All The Pigs, All Lined Up

This version is entirely in 4/4 and has en extended ending that incorporates the lyric "Don't you feel a whole lot better?" This version is also much less guitar oriented, with extra synth layers added as well as additional crowd noises and pig squeals not prominent in the original. It ends in a loud, distorted drum pattern before collapsing to noise feedback, which segues directly into "A Violet Fluid."

March Of The Pigs (Video Version)

This is the version used in the studio performance music video for the song. It can be found in audio form on the US cassette release of "Closer To God" and an Australian CD compilation entitled "Obdurate: The Best Music Around", billed as "March Of The Pigs (Live)." The music video itself can be found on Closure and the 10th Anniversary DualDisc version of The Downward Spiral. Unlike most live performances of the song since its release, this one does not include an extended ending, though it does feature new pig squeal samples at the beginning.

March Of The Pigs (Closure)

Recorded in bootleg-like quality, this performance is featured on the first disc of Closure. It features the extended ending as has been performed consistently since its debut.

March Of The Pigs (And All That Could Have Been)

Typical of how the song has usually been performed live since the Self Destruct Tour, this live version incorporates an extended ending based on that of "All The Pigs, All Lined Up."

March Of The Pigs (Beside You In Time)

Like the version that appears on And All That Could Have Been, this live version incorporates the ending of "All The Pigs, All Lined Up." However, the introduction is arranged differently, and features different vocal improvisation during the ending. Aaron North takes a stage dive during said improvisation and crowd surfs back to the stage, creating lots of feedback noises. 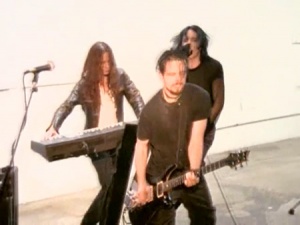 Screenshot from the "March Of The Pigs" video

A music video was made for this song, directed by Peter Christopherson and released in March of 1994. The video features the band performing the song live in front of a white wall backdrop. Reportedly, around a dozen takes were done, and the final video take was the one that "did not suck." It's filmed in one shot, a rare occurrence for music videos. This video was the last video to be played on MTV2's Increase the Beat, on Memorial Day weekend 2002. At 269 BPM, it had the fastest tempo of the 400+ videos that were played that weekend.

A previous version of the video was partially shot but abandoned, and is included in glimpses on the Closure DVD. The band performs the song in a red, cave-like set with water at their feet, with a dwarf in troll-like costume running in and out of the set. Photographer Joseph Cultice, who was on set to document the shoot, elaborated on the original video for Revolver Magazine:

It looked too much like a video they'd done before with the director [Peter Christopherson]. So we stayed [in the studio] the next day and they shot that 'March of the Pigs' [performance] video. They came up with the idea at night: a one-camera shot. And they shot it maybe five times all the way through, and that was it. Trent's in a big black plastic pool they made, basically a kiddie pool. What was supposed to happen in the scene was there's creature hands that come up and grab his head and pull him underwater. So he's laying there getting ready for that. And underneath him is a guy in a black outfit that you can barely see him, but [those are his] hands. That water was really really warm, it was like a Jacuzzi. It's inside this, like, cave they built inside with water and smoke machines. They just jumped around there really, really loudly to 'March of the Pigs' for 20 million takes.[2]

"March Of The Pigs" has been covered by a variety of artists. More information can be found here.

Being a staple NIN song with its high energy segued by two piano breakdowns, there is a live performance video of "March Of The Pigs" on each of their live releases. In the live set, the band extends the song by including an amped up portion of "All The Pigs, All Lined Up" at the end of almost every performance.

In most performances in the pre-With Teeth eras, the songs starts with similar high pitched squeals as it does in the performance music video for the song. The Live: With Teeth arrangement started with Alessandro Cortini playing the synthesized bassline twice, stopping for eight bars of the drum pattern before the band launched directly into the first verse. Reznor typically starts the song with the spoken lyrics "C'mon you pigs... march!".

Since 2009, Ilan Rubin has left the drum set to play the song's two keyboard interludes before rushing back to continue on drums when the song kicks back in.