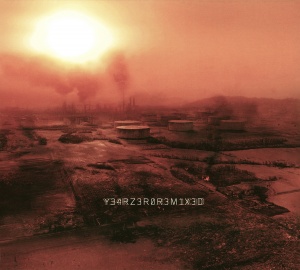 The album contains remixes from artists that Trent Reznor contacted and asked to do remixes, as well as a fan remix. "My Violent Heart: Pirate Robot Midget" is a fan remix that initially appeared at ninremixes.com, but Reznor was so impressed by it that he asked for permission to add it to Y34RZ3R0R3M1X3D. Multitracks from each track were released and remix.nin.com was launched for sharing of remixes.

02 "The Great Destroyer": Remix by modwheelmood

04 "The Beginning Of The End": Remix by Ladytron J-Type Overdrive

09 "Meet Your Master": Remix by The Faint

11 "Me, I'm Not": Remix and Additional Production by Olof Dreijer

12 "Another Version Of The Truth": Remix Produced by Kronos Quartet and Enrique Gonzalez Müller

13 "In This Twilight": Remix by Fennesz

The cover art was posted on NIN.com on August 15, 2007. The titles of the illustrations used for the front and back covers are The Scorched Earth and The Poisoned Sky, respectively. The cover art for Y34RZ3R0R3M1X3D is similar to the cover art for the Capital G promo.

Although there doesn't seem to be anything hidden in the cover art, a closer look at the inner booklet of the CD/DVD shows the phrase "WE DESERVED BETTER THAN THIS", along with "YOUR GOVERNMENT (Illegible)" and "AIR" scrawled on an abandoned house in a polluted wasteland. It is unknown if these were part of the ARG or led to new websites.