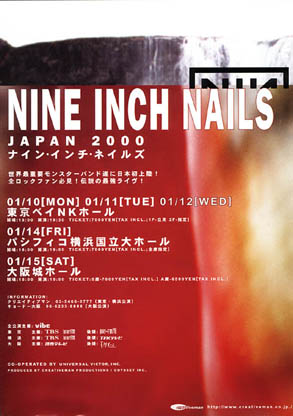 The live Nine Inch Nails performance on January 11th, 2000 took place at the Bay NK Hall in Tokyo, Japan. This was the thirteenth show on the Fragility v1.0 tour. It was the second of three shows played at the Bay NK Hall.

This show marked the first performance of "Get Down, Make Love" since 1995.

Reznor fell on his face during "March Of The Pigs" and had a hard time staying vertical for the rest of the song.

Just before the encore:

Before "Hurt," Reznor made a very heartfelt speech: