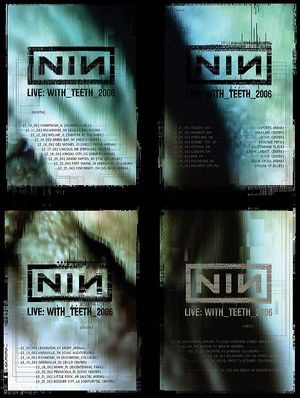 The second arena leg of the Live: With Teeth tour took place between February and April 2006 and covered smaller markets in the US and Canada. This tour was documented on Beside You In Time. Opening acts for this tour were Moving Units and Saul Williams. 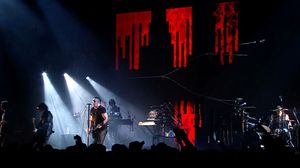 The band with geometric "teeth" lights 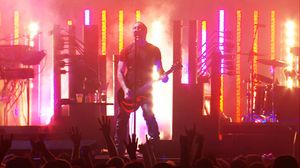 This tour incorporated a very elaborate visual display, incorporating a screen behind the stage, light columns, geometric "teeth" lights inspired by the With Teeth era artwork, a grid of overhead lights, and a sheer silver screen that would drop in front of the stage. Each show began with the screen dropped down in front of the stage and would be raised as the third song in the set ("You Know What You Are?" or "Sin") began. It would drop down again halfway through the set for "Eraser," "Right Where It Belongs" and "Beside You In Time," with film footage directed by Andrea Giacobbe projected onto the screen for the former two songs. Near the end of "Beside You In Time," Reznor "shattered" the screen with his mic stand, prompting it to be raised.

The setlist structure remained basically the same since the previous With Teeth Fall Arena Tour, but the number of songs played during the tour and the rotation on certain slots increased. "Pilgrimage" made its live debut on this tour, though only in short pre-recorded form as intro.

In a question submitted to nin.com/access, a fan asked what music was being played before the With Teeth Touring Cycle shows, and Reznor posted a list of songs.