This tour took place between July and December in order to support the Not The Actual Events and Add Violence EPs. It is part of the NIN 2017-2018 touring cycle. These are the first Nine Inch Nails shows since the NIN 2013-2014 touring cycle. 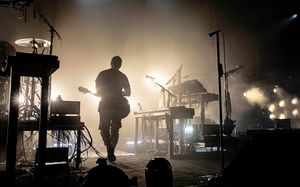 "Branches/Bones", "Less Than", "The Lovers", "The Background World", and "Burning Bright (Field On Fire)" made their debuts.