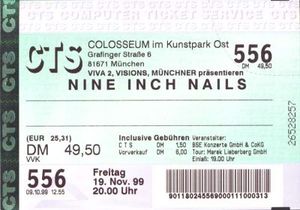 The live performance on November 19th, 1999 took place at the Colosseum in Munich, Germany. Atari Teenage Riot opened for Nine Inch Nails. This was the third show on the Fragility v1.0 tour.

After "March of the Pigs," Reznor had this to say:

Before the last song, he said: