Nine Inch Nails played at the Starplex Amphitheatre in Dallas, Texas, on May 23, 2000 as part of the Fragility v2.0 tour. A Perfect Circle were the opening act.

May 23, 2000 was also the original release date for A Perfect Circle's first album, "Mer De Noms". 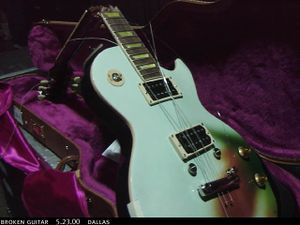 One of the more predominantly featured guitars in the "And All That Could Have Been" footage was broken on this night. At the end of "Wish", Reznor tossed this guitar into the air above himself, it then came crashing down onto the stage, snapping the neck of the guitar. This image was later posted on nin.com.

You may include links to concert reviews and other articles about the concert. YouTube links are welcome as long as they have been uploaded by the person who recorded the video.