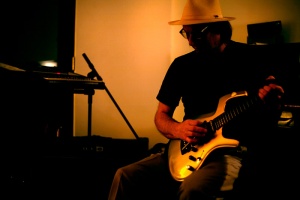 Adrian Belew (born December 23, 1949, in Covington, Kentucky) is a musician and vocalist perhaps best known for his work as a guitarist for the progressive rock group King Crimson, which he joined in 1981. He was discovered by Frank Zappa playing Rolling Stones covers in a Holiday Inn lounge band.

He is known for experimenting with various guitar effect pedals and the guitar synthesizer. A trademark of his style is using the tremolo arm (whammy bar), garnering him the nickname "The Twangbar King." He is also famous for playing a Parker Fly guitar, which has been utilized on some Nine Inch Nails recordings and tours.

On November 15, 2007, he reported on his blog about being invited to perform on what would become Ghosts I-IV:

and the whole day just got better...

when I received a call from Trent Reznor
asking me to work with him on new music
in L.A. for the first week of december.

trent has always championed my playing.
he once said in Guitar Player Magazine
"adrian is the most awesome musician in the world."
I've always joked that it was a typo
and that he really said the most awful musician.

but it is seriously a mutual admiration.
in my opinion, no one makes better sounding records than trent.
I love what he does and I'm happy he feels the same.

He was originally confirmed as a touring member of Nine Inch Nails for the NIN 2013-2014 tour, but exited the lineup before the tour started.[1] Belew elaborated in an interview:

Trent [Reznor] and I were hoping to re-invent the band. As it turned out, when we got in rehearsals and everything started in earnest, it just didn’t go that way. In the end we were just learning each song exactly as it was on the record; within a couple of weeks it seemed like there wasn’t going to be any reinvention of the band, so why was I there?

They already had a great guitarist in Robin Finck, who’s been with Trent since 1993; he knows the material inside out, way better than I’d ever know it if you wanted exactly what was on the record. I didn’t feel being essentially a sideman was a role that I wanted to take at this point, and Trent agreed.

We were going to learn something like 55 songs; we’d learned 21 in two and a half weeks and it seemed like it wasn’t going anywhere new. That was only a disappointment inasmuch as I was looking forward to the challenge and going around the world in that kind of circumstance – but, at the same time, not that much as I really would prefer to be doing Flux![2]