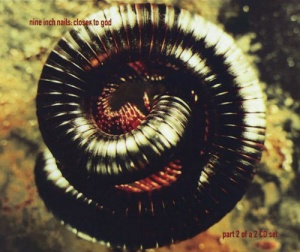 I never shot still lifes of bugs before. But I'd assisted a guy named Hans Neleman, who was lighting things with mirrors and little teeny hot lights and laying things between layers and layers of glass — that's like coffee and milkshakes and snot and dirt and stuff from the street. On this one the bug is right on top and sharp, but all that stuff below is different layers of junk on the glass. Remember that movie Interview With a [sic] Vampire? It had just finished wrapping … The guy that brought the bugs was part of the company that did all the animal wrangling for Interview With a [sic] Vampire — all the alligators and all that. He brought boxes and boxes — like Ikea clear boxes — filled with millipedes and cockroaches. We shot like 50 different pictures of bugs, and this is the one that turned out to be the cover. Trent was there the whole day, because he wanted to hang out with the bugs.

Credits (track numbers as in US edition)