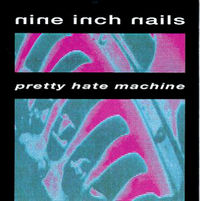 Pretty Hate Machine (also known as Halo 2) is the first studio album by Nine Inch Nails, released on October 20, 1989 by TVT Records and was a huge success. The first single off of the album, Down In It, was released on September 27, 1989.

It received radio airplay for the aforementioned "Down In It" as well as subsequent singles "Head Like A Hole" and "Sin".

Working nights at Right Track Studio as a handyman and toilet cleaner, Trent Reznor used studio "down time" to record and develop his own music. Playing most of the keyboards, drum machines, guitars, and samplers himself, he recorded a demo, unofficially titled Purest Feeling.

Teaming up with manager John A. Malm, Jr. they sent the demo to various record labels. Reznor received serious offers from many of them. He signed a deal with TVT Records who, until then, were known mainly for releasing novelty and television jingle records.

An early effort called "The Industrial Nation" was rejected by TVT. This led Reznor to take tracks from the denied earlier works. Pretty Hate Machine was then recorded in various studios around the world with Reznor collaborating with some of his most idolized producers - Flood, Keith LeBlanc, Adrian Sherwood, and John Fryer.

The album also gained popularity through word-of-mouth and developed an underground following. Reznor quickly hired a band for touring with The Jesus and Mary Chain, including guitarist and future Filter/Army of Anyone frontman Richard Patrick. Nine Inch Nails' live set was notorious for louder, more aggressive versions of the studio songs, and also for destroying their instruments at the end of sets. Reznor preferred using the heel of his boots to strip the keys from expensive keyboards.

Since the album was released, a recording known as Purest Feeling surfaced. This bootleg album contains the original demo recordings of most of the tracks found on Pretty Hate Machine, as well as a couple that were not used ("Purest Feeling" and "Maybe Just Once").

The entire album was covered by a string quartet in 2005 as The String Quartet Tribute to Nine Inch Nails' Pretty Hate Machine, arranged by Eric Gorfain. [1]

Pretty Hate Machine went out of print through TVT Records, but was reissued by Rykodisc Records on November 22, 2005 with slight changes in the packaging. Prudential owned TVT's Nine Inch Nails recordings, but Rykodisc leased the rights. Reznor had expressed an interest in creating a "deluxe edition" with surround sound remastering and new/rare remixes, similar to the re-release of The Downward Spiral. Rykodisc liked the idea, but not enough to pay Reznor to do so.

In April 2010, Bicycle Music bought the entirety of TVT's catalogue, including Pretty Hate Machine. They confirmed that they would be reissuing the album once more, and there is speculation that they would be willing to release the deluxe edition proposed by TVT in 2005.

The co-publishing rights to Trent Reznor’s Nine Inch Nails catalog include the songs from all album releases from Pretty Hate Machine through Year Zero. As well, in acquiring the master recording rights to NIN’s groundbreaking debut, Pretty Hate Machine, Bicycle will be responsible for re-releasing this album which has been out of print and unavailable through digital distribution outlets for several years. “It goes without saying how important these works are to the entire landscape of Alternative Rock. Our team sees incredible creative and business opportunities with this catalog and we look forward to working with our new partners and artists”, said Steve Salm, Partner at Bicycle

Reznor stated in one of his posts on the Prodigy service in the early 90s that:

"The cover of PHM is a photo of the blades of some sort of turbine stretched vertically so they would look somewhat like bones or a rib cage."[2]

It should be noted that the line "Kicking ass way beyond the call of duty: John A. Malm, Jr." is not present in the RYKO CD rerelease.