Difference between revisions of "Hurt (song)"

Album:The Downward Spiral
Length:6:13
Tempo:80 BPM
Versions:Hurt
Hurt (Instrumental)
Hurt (Quiet)
Hurt (Live)
Hurt (with David Bowie)
Hurt (And All That Could Have Been)
Hurt (Beside You In Time)
Hurt (Bridge School Benefit)
Live:Further Down The Spiral Tour through present

"Hurt" is the final track on The Downward Spiral.

The idea of the narrator being or feeling "a million miles away," as sung at the end of this song, would be mentioned again in both "All The Love In The World" and "1,000,000." Whether the three songs are all specifically related beyond repetition of the phrase is publicly unverified. 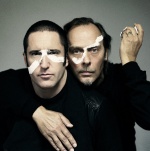 Artwork for the Peter Murphy and Trent Reznor version

Hurt has been covered by a variety of artists, such as Matthew Good, Breaking Benjamin, Underoath, Aaron Lewis, and Sevendust. The song gained a new wave of popularity in 2002 when it was famously covered by Johnny Cash, at the recommendation of producer Rick Rubin. This caused a lot of confusion for the audiences of Cash, who generally weren't familiar with the work of Nine Inch Nails, often resulting in miscrediting the song to Cash. In Cash's version, the line "crown of shit" is changed to "crown of thorns," but is otherwise unchanged.

A version by Peter Murphy with Trent Reznor on piano was released exclusively through iTunes in 2009, while Murphy was releasing a string of covers. It was recorded in the studio, presumably during the same time period as the With Teeth: Summer Tour 2006 Radio Collaboration.

This original album version uses slightly distorted guitars and disrupted noise loops, adding a ragged aesthetic. The song suddenly climaxes towards the end, while the final lyrics are whispered over the noise. A drone follows, and ends the song and the record. This version was also featured as the final track on its promo, which also includes a clean version of the same mix.

A reversed version of the track is hidden on side B of the Not The Actual Events vinyl.

Released by Reznor via his remix.nin.com account, this is an instrumental of the "Quiet" version.

The only real difference between this remix and the original is that the guitar sound is much cleaner and the climax towards the end is less drastic. There is also much less static filling the song's atmosphere. This version appears only on the US version of Further Down the Spiral and was later included on The Downward Spiral 10th Anniversary Deluxe Edition. Two additional versions of it were included on the "Hurt" promo: "(Quiet Version) Clean" is censored and fades out the noise loop ending, while "(Quiet Version) Soiled" is uncensored and uses a shorter rearrangement of the noise loops, which end suddenly.

This live version is found on the UK edition of Further Down The Spiral and in video form on Closure and The Downward Spiral 10th Anniversary DualDisc edition. In this version, the guitar is replaced with a piano. Reznor moans melodically and quietly after the noisy ending fades away, and the faint sounds of the introduction from "The Downward Spiral" can be heard fading out. On the "Hurt" promo, two versions of this recording are included, one censored and one uncensored, both of which fade in the beginning and out the ending.

Ending the cooperative transition set on the 1995 Dissonance tour, this remix of "Hurt" was played live by David Bowie and his band, featuring Reznor singing the duet with Bowie as they trade verse sections and choruses. More spacey and featuring new drum loops and guitar, the first half of the song gave way to a return to the album guitar parts after the initial chorus. Its noisy ending eventually segued into the opening song of the Bowie set, "Look Back in Anger." A performance of this version is included on Closure.

Hurt (And All That Could Have Been)

This version is faithful to the album version besides the addition of the vocal harmony in the chorus. Robin Finck is playing a nylon-stringed guitar which emulates a piano-like tone. This can sometimes be misheard as a piano rather than the guitar.

Hurt (Beside You In Time)

This live version starts with Reznor singing the vocal part and playing the piano melody solo on a keyboard. Jeordie White joins in on bass for the first chorus, and the rest of the band joins during the second chorus.

In 2006 Reznor performed at Neil Young's Bridge School Benefit, performing his only full solo concerts. He was backed by a string quartet for the performances, resulting in a Still-inspired performance. This version was released on the digital-only album The Bridge School Collection, Vol. 4. 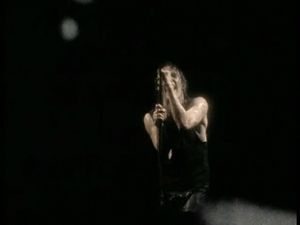 Screenshot from the "Hurt" video

The music video is simply tour footage of Reznor singing behind a scrim. The footage used for this was shot in Dallas, Texas, and Omaha, Nebraska, in February of 1995. This video was released after a fully produced music video was scrapped. Both the scrapped studio video and the final live video were directed by Simon Maxwell. The live video can be found in the DualDisc edition of The Downward Spiral

A second edit of "Hurt" was released on Closure. It is mostly similar to the original music video, but includes some alternate takes, as well as some tracking shots of the audience members. It is likely that this new edit (along with the live videos for "Eraser" and "Wish") were produced for Maxwell's abandoned professionally shot music concert film documenting the Further Down The Spiral Tour performances.

Behind-the-scenes footage of the original video can be seen in the "Appendage" footage on the Closure DVD leak. The original video appears to be similar to the video for "Burn". It features Reznor justified to the right of the screen, singing the song with footage of war atrocities and other acts of violence in the background, presumably the same footage projected in the live version. A 2016 interview with Maxwell gives background information about both the original and the final, released video.[1]

"Hurt" is one of the most commonly played live songs throughout all eras. It is frequently played as the last song at nearly every show, though there are a few exceptions: featured during the mid-set slow section of the Further Down The Spiral Tour, a few songs before the end on Live: With Teeth, and the penultimate song of Lights In The Sky Tour.

For the ReAct Now live performance, Reznor performed the Cash lyrics of "Crown of thorns" in place of "Crown of shit".

In the final recording, the line in the second verse is changed to: