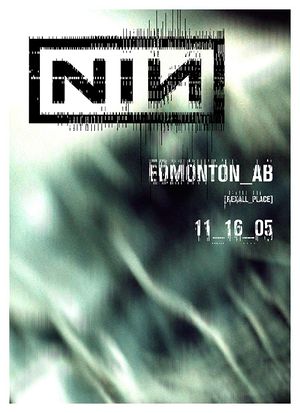 Nine Inch Nails played at the Rexall Arena in Edmonton, Alberta, on November 16, 2005 as part of the With Teeth Fall Arena Tour. Death From Above 1979 and Queens Of The Stone Age were the opening acts.

Right after "Beside You In Time" was played, Trent Reznor asked the audience in the front rows to take a few steps back as the push of the people on the floor had caused the steel barricades to come apart. This took several minutes to assess and had forced at least one song (possibly "With Teeth" or "Piggy") out of the setlist.

This was also NIN's first performance in Alberta.

You may also include links to concert reviews and other articles about the concert. YouTube links are welcome as long as they have been uploaded by the person who recorded the video. Bold text