This tour took place between April and August 1994 in North America and Europe in support of The Downward Spiral and ended with the famous Woodstock '94 performance. The tour is part of the Self Destruct Touring Cycle. Opening acts for this tour were Die Krupps, Fem 2 Fem, Marilyn Manson, PIG, Treponem Pal and Type O Negative. 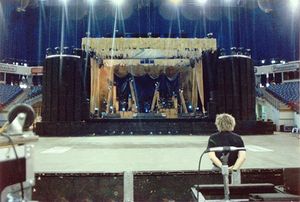 The stage setup for this tour was somewhat basic. An onstage lighting detail was provided by very tall columns with a single spotlight atop each one. There was a large draped backdrop (apparently made of rubber) and chunks of linen-like fabric hung across the top of the stage structure. There was also a three-piece scrim at the front of the stage that would be pulled away during the first song. The drums and main keyboard were both on large, rustic wooden risers with pieces of dark fabric hanging off them and what appear to be fake blood stains. Reznor's keyboard was mounted on a swinging stand fitted with a motorcycle shock absorber, and Lohner's keyboard stand had nails and screws welded to the edge of it.[1]

Also "Burn" made its live debut on the second to last show of the tour.