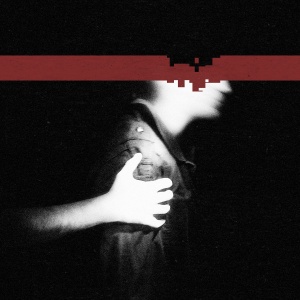 While Trent Reznor is known for laboring over his music for years at a time, The Slip was written in a month and recorded in just three weeks, with mixing, mastering, and art taking one additional week.[1] The album was originally intended to be an EP, but quickly grew to album length.[2]

In a Patreon post[5], Rob Sheridan explained the inspiration behind the album cover:

The Slip's cover was a direct homage to this 1982 (Roman) Cieslewicz poster (for a Paris exhibition on town planning, of all things):

As soon as I showed it to Trent he was struck by it, and we wanted to create something similar for the cover. So the intent of the photo was very clear from the beginning, and that helped me choose the right tools to execute it with. I set up a black backdrop and a bright desk lamp (to get a hot, overexposed light source that would sharply fall off into shadow) in a back room during Lights In The Sky rehearsals in 2008. NIN keyboardist Alessandro Cortini stood in as our arm model, and I had Trent walk forwards into the frame and then had Alessandro physically grab Trent's shoulder and jerk him back slightly to stop him. This created the motion blur on Trent's face that communicated the action in the image, captured with a slow-ish shutter speed. We did a few takes, and I was able to let them go back to rehearsals after maybe fifteen minutes of shooting - that was all I needed to get the right raw materials.

I found the perfect capture from the shoot, edited it in Photoshop, and then took it into Exposure, modifying the vintage B&W daguerreotype high contrast preset to give the photo the softness, heavy grain, and blown-out photocopy look we were inspired by in Cieslewicz's poster. From there, I added the broken red bar design element and the same worn paper texture used throughout The Slip's art to unify it.

Of the individual track artwork, Sheridan stated: "For Nine Inch Nails' album, we created logos representing each song, and embedded them in the MP3s to give each song its own visual identity when played digitally. Each logo played upon the meaning or title of the song, sometimes overtly, sometimes very abstractly. A scribbled red line crossed into most of the images, struggling to find harmony with the shapes, but ultimately failing." In a Patreon Q&A session[6], Sheridan was asked about the art for "Demon Seed" and he explained that it was "the end of the journey of the red line that moved through the artwork of that record, trying to make sense of the rigid forms, sometimes fighting them, before finally overtaking them. It was Trent's idea to have the line take over 'Demon Seed' so completely/aggressively. It tied in to the meaning behind the music, which isn't my place to discuss as TR tends to keep that stuff close to his chest." In a Twitter post, Sheridan explained that the track logos were inspired by De Stijl/Neoplasticism.[7]

The cover of the booklet is a new piece of artwork that depicts several light gray lines on a dark background (the same color as the one for 1,000,000). Five lines, two on the ends and three in the middle, all travel straight downward from the top edge to the bottom. Two more lines, in between the three middle and two outside, on each side, start straight downward, then slant inward, then travel straight downward parallel to the other lines before they would intersect the ones in the middle. These lines combined form a variation on the NIN logo (second "N" being backwards).

Audiophile message board Hydrogen Audio noticed mastering errors on the 24/96 high-def WAVs, which was followed by posters "ningineer" and "treznor" who wrote that they had recontacted the mastering studio and released the WAVs in addition to high-def FLACs.[8] On May 15th the nin.com Halo 27 blog post was edited with the message: "Some friends at hydrogenaudio pointed out an error with the high resolution WAVE files we didn't catch. The corrected files are now posted along with high resolution FLAC files as well. If you're interested in these, simply re-download the new files. Sorry for the hassle!"