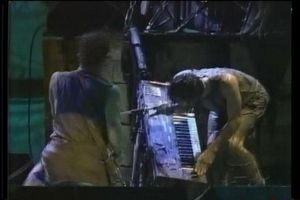 We were right out by the big mud pit and watchin' everybody, I thought, "well, this looks like a lot of fun." At that time there wasn't that many people that were muddy, but the people that *were* in the mud looked like they were having a great time and we thought "fuck, y'know, we kinda can't actually do that." But we didn't have showers backstage at that time either, so we went back and hung out backstage, and it was just a real nervous day. Then on the way to the stage I pushed Danny [Lohner], our guitar player, and he just fell face-first into the mud. Then he tackled me and it turned into a kind of all-male mud wrestling thing. It was actually really funny. After we did that, all nervousness kind of subsided.