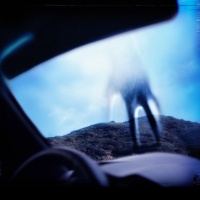 On February 25th, 2007, several fans noticed a "glitch" next to the song "In This Twilight" on yearzero.nin.com. Later that night, an ETS member found a USB key at a concert in the UK. He handed it off to a friend who contacted several sources online to host the song and image which were on the USB key. Later, another website, Hollywood in Memoriam, was discovered.